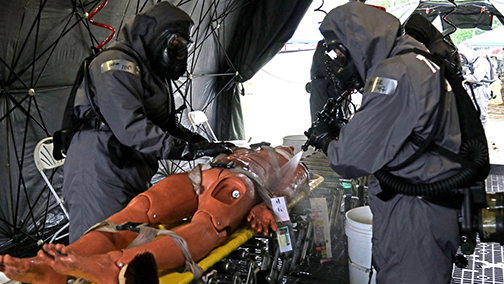 The Pentagon considers hypersonic weapons one of the emerging technologies that could determine the outcomes of future wars. However, the United States’ efforts remain lacking as its rivals continue deploying new hypersonic missiles.
While working to advance hypersonic technology, Washington is also getting ready to defend against such weapons. The scenario for the latest exercise was believed to be directly inspired by the conflict in Ukraine.
Moscow has been employing missiles to attack targets in big cities.
According to the Philadelphia Inquirer, “the exercise involved 400 members of the United States Army, National Guard, and Coast Guard and 150 members of Philadelphia Fire, Police, Office of Emergency Management, FEMA, and five local hospitals.”
In a hypothetical situation, a hypersonic missile destroys Lincoln Financial Field and causes a wave of casualties throughout the city. The situation was further exacerbated by the train carrying poisonous gas that derailed in the simulation.

In addition to saving civilians, the military and first responders had to decontaminate them with chlorine.
Helicopters from the National Guard flew low over the city and set up military treatment centers to assess and care for actors pretending to be terrified and hurt civilians. Lt. Col. Brian Higgins, who oversaw the exercise, tells the Philadelphia Inquirer, “We’re talking America’s worst day.”
The exercise was overseen by Task Force 46 — a multi-state Guard Task Force centered on the 46th Military Police Command of the Michigan National Guard. Task Force 46 is a national response force responding to “catastrophic chemical, biological, radiological, and nuclear incidents” across the country.
The Inquirer describes Task Force 46 as “a specialized homeland security unit that a presidential declaration could only activate.” The 46th Military Police Command is operationally under the control of the Governor of Michigan, but the President may “federalize” it by putting Task Force 46 on national active duty.
The 46th Military Police Command provides command and control for 12 Army National Guard units and other military branches from all over the nation to foster collaboration and create plans and procedures that benefit all parties, including local, state, federal, private sector, academic, and Canadian partners.

During the exercise, the hypersonic missiles struck New York, Chicago, and Philadelphia.
China and Russia have made significant strides toward developing hypersonic weapons that can travel at Mach 5 or higher. Earlier, Pentagon officials stated that Russia had launched 2,100 missiles, including 10 to 12 hypersonic weapons, in Ukraine at the beginning of May.
Weapons classified as hypersonic can fly at Mach 5 (3,836 mph) or higher. Hypersonic missiles are typically propelled to white-hot speeds by rocket engines, then they separate from the rocket motor and glide the remaining distance to the target.
Conventional intercontinental ballistic missiles travel in fairly predictable up-and-down arcs. However, hypersonic weapons can take flight at altitudes where few military sensors can detect them because they are maneuverable.
The weapon has a speed intended to reduce the time defenders have to react, and many hypersonic weapon flight profiles are currently immune to conventional surface-to-air missiles. The United States lags behind its enemy states in fielding operational hypersonic missiles.
On the other hand, Russia is believed to have some operational hypersonic weapons, including the Zircon ship-launched missile, Kinzhal air-launched missile, and Avangard strategic hypersonic weapon.
The KH-47M2 Kinzhal and the Avangard boost-glide vehicle, two of Russia’s operational hypersonic weapons, are both capable of carrying nuclear warheads.
The DF-17 from China is regarded as nuclear-capable but is not officially referred to as a nuclear weapon. Its primary objective is to target the US aircraft carrier from a greater distance.
It is unknown why Moscow used hypersonic weapons in Ukraine, but experts think it may have done so to test the technology’s efficacy in a real-world setting and to pressurize Ukraine. Russia’s Zircon hypersonic missiles can be launched from Russian submarines.
However, Zircon’s shorter range compared to conventional subsonic cruise missiles means that Russian subs would have to approach their target closer to fire their weapons. They run a higher risk of being discovered—and destroyed—by the American Navy.

UN voices concern over outbreaks of diseases in flooded Pakistan