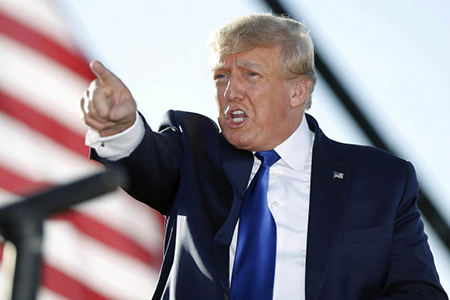 Washington, July 27 (AFP/APP): Donald Trump returned to Washington on Tuesday for the first time since leaving the White House 18 months ago, delivering a fiery speech sprinkled with strong hints he may run for president again in 2024.
The 76-year-old Trump stopped short of declaring his candidacy, but laid out what he believed should be the priorities for the “next Republican president.”
“I always say I ran the first time and I won, then I ran a second time and I did much better,” Trump said. “We may just have to do it again. We have to straighten out our country.
“I look forward to laying out many more details in the weeks and months to come.”
Several hours before Trump took the stage at the right-wing America First Policy Institute, his former vice president, Mike Pence, who is also considering a White House run in 2024, addressed a different conservative audience in Washington.
Speaking at the Young America’s Foundation conference, Pence said Americans must look to the future not the past and played down differences with Trump.
“Elections are about the future,” Pence said. “I came today not to look backwards but to look forward.
“I don’t know that the president and I differ on issues,” he said. “But we may differ on focus.”
Trump’s 90-minute address to the conservative America First Policy Institute echoed many of the themes of his victorious 2016 campaign, including illegal immigration and crime.
Trump repeated his false claims that he won the 2020 election and denounced the House committee investigation into the January 6 attack on the US Capitol by his supporters as the work of “political hacks and thugs.”
“If I renounced my beliefs, if I agreed to stay silent, if I stayed at home and just took it easy, the persecution of Donald Trump would stop immediately,” he said. “But that’s not what I will do. I can’t do that.
“They really want to damage me so I can no longer go back to work for you,” he said.
“And I don’t think that’s going to happen,” he added, prompting chants from the crowd of “Four more years!”
Trump lashed out repeatedly at Democratic President Joe Biden, blaming him for the country’s ills.
“We are a nation in decline,” he said. “We are a failing nation.”
“Inflation is the highest in 49 years,” Trump said “Gas prices have reached the highest in the history of our country.”
He accused Biden of allowing an “invasion” by millions of migrants crossing the southern border.
“Other countries very happily send all of their criminals now through our open border into the United States,” he said.
“The next Republican president must immediately implement every aspect of the Trump agenda that achieved the most secure border in history,” he said.
Trump said the United States “is now a cesspool of crime.”
“We have blood, death and suffering on a scale once unthinkable,” he said. “Democrat-run cities are setting all-time murder records.”
He accused Biden of having “surrendered in Afghanistan,” and allowing Russia to invade Ukraine.
“It would never ever, ever have happened if I was your commander-in-chief,” he said.
Since taking his last Air Force One flight from Washington to Florida on January 20 last year, Trump has remained the country’s most polarizing figure, continuing his unprecedented campaign to sow doubts about his 2020 election loss to Biden.
For weeks, Washington has been riveted by hearings in Congress about the January 6 storming of the Capitol by a Trump mob and his attempts to overturn the election.
With Biden’s approval rating currently below 40 percent and Democrats forecasted to lose control of Congress in November midterm elections, Trump is apparently bullish that he could ride the Republican wave all the way to the White House in 2024.
On the Democratic side, fury at Trump is also providing energy in the run-up to the midterms.
The House committee hearings have laid out evidence that Trump oversaw nothing less than an attempt to break US democracy, first through trying to rig electoral procedures behind the scenes and finally in encouraging a mob to attack legislators certifying his loss.
Facing chatter that at 79 he is too old to be thinking about seeking a second term in 2024, Biden says the specter of another Trump candidacy is one of his main motivations for running again.
The president took aim at his predecessor after Trump’s speech, tweeting: “Call me old fashioned, but I don’t think inciting a mob that attacks a police officer is ‘respect for the law.'”
“You can’t be pro-insurrection and pro-cop — or pro-democracy, or pro-American,” Biden added.