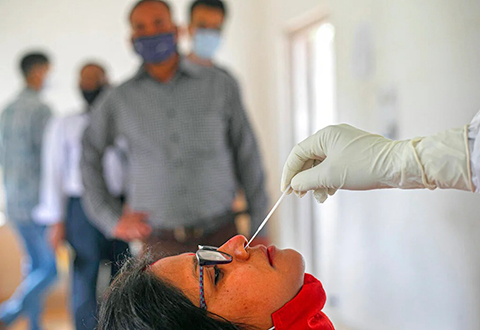 NEW DELHI: India has begun randomly testing international passengers arriving at its airports for COVID-19, the country’s federal health minister has said, citing an increase in cases in neighbouring China.

Mansukh Mandaviya announced the new rule in parliament on Thursday, where he also urged state governments to increase surveillance for any new coronavirus variants and send samples of all positive cases to genome sequencing laboratories.

Local media reports said at least four cases of BF.7 – the Omicron subvariant that is driving the current surge in China – have been found in India so far.

However, Dr Randeep Guleria, a pulmonologist and former head of the All India Institute of Medical Sciences (AIIMS) in capital New Delhi, told Al Jazeera the situation in India is different from China.

“Both from lifting the Zero Covid policy and a large number of people there (in China) who were never been exposed to the virus are now being exposed to BF.7 variant which spreads very rapidly,” he said.

“And the vaccine uptake is also not as good as in India. So these factors are probably contributing to the spread there,” he added.

Guleria said the BF.7 strain of the coronavirus had been in India for at least past two to three months.

“We haven’t seen a huge surge yet and the cases have come down. So it is likely that we will not have the type of effect like China,” he said, adding that India still needs to be vigilant as the virus can evolve and imitate over the next few months.

Health minister Mandaviya asked the public to wear masks and maintain social distancing, even though there are no official mandates for either.