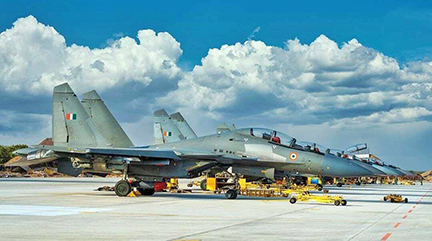 DEESA: The new air base is located at Deesa in the Banaskantha northern district of North Gujarat, 130 kilometers from the Indo-Pak border.

The airbase, which currently only has a 22-kilometer boundary wall and 20 watchtowers, will be developed into a full-fledged air base at an estimated cost of Rs 980 crore ($12M). The development project will take place in two phases.

The first phase will involve the construction of the primary runway, parallel taxiway, loop taxiway, and fighter squadron dispersal area. The technical infrastructure and residential accommodation will be planned in the second phase, according to the IAF officials. The whole air station has been planned to be finished by December 2023., and is expected to become operational by 2024.

The Deesa airbase will come under the South Western Air Command (SWAC). Once completed, it will be IAF’s fifth airbase in Gujarat. The service has airbases at Baroda, Jamnagar, Bhuj, and Nalia (Kutch).

Prime Minister Modi highlighted Deesa’s proximity to the Indo-Pak border, saying that now India is better prepared to respond to any misadventure on its western borders.

“The new airfield at Deesa is an achievement with regard to national security and development of the region. The international border is just 130 kilometers away. If our forces, especially the Air Force, are in Deesa, we will be able to respond much better to any challenge on the western border,” Modi said.

“This region will now become an effective center of security of the country,” he added.

The IAF will reportedly deploy its MiG-29 and Tejas aircraft at Deesa Airbase to intercept the Pakistan Air Force (PAF) fighters that could take off from Pakistani air bases in Mirpur Khas, Hyderabad, and Jacobabad to target India’s industrial zones worth over one trillion dollars in and around cities like Ahmedabad, Bhau Nagar and Baroda in Gujarat.

According to Defense Analyst Rahul Bedi, one of the primary reasons for constructing the Deesa air base is to protect the Jamnagar oil refinery owned by Reliance Industries Limited, which is also the world’s largest oil refinery. Bedi told BBC Urdu that India would be in big trouble if this refinery came under attack, pointing out that Deesa air base is well positioned to protect it.

Deesa will also endanger the Pakistani cities of Hyderabad, Karachi, and Sukkur with the IAF’s deep penetration strike aircraft.

Overall, the Deesa air base will provide the IAF with a faster offensive capability, as Indian fighters flying at Mach 2.0 can cross the international border in two minutes.

The new airbase will also close a tactical gap between the IAF’s forward air bases at Naliya, Bhuj in Gujarat, and Phalodi in Rajasthan.