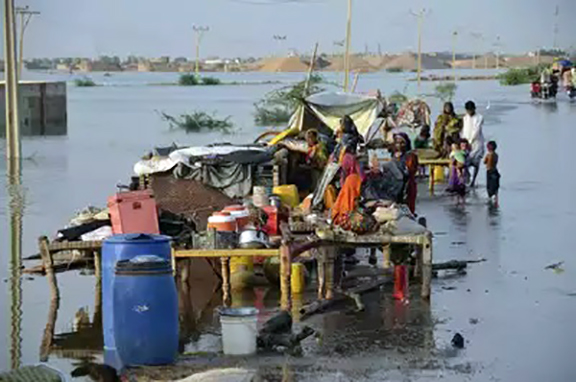 Indian Prime Minister Narendra Modi has offered condolences to the victims of deadly floods in Pakistan, which have killed more than 1,000 and devastated much of the country, amid reports that New Delhi could soon offer assistance to its neighbor.

Modi took to Twitter on Monday to comment on the natural disaster, saying he is “Saddened to see the devastation caused by the floods in Pakistan.”

“We extend our heartfelt condolences to the families of the victims, the injured and all those affected by this natural calamity and hope for an early restoration of normalcy,” the PM added.

According to sources cited by the Indian Express, Modi’s government is now mulling whether to authorize humanitarian aid to Pakistan to help deal with the aftermath of the floods, which have killed more than 1,100 people according to the latest tally. While the outlet said no final decision had been made, it noted that “top officials” are discussing the possible move.

If approved, it would be the first round of humanitarian aid to Pakistan since Modi took office in 2014, though prior governments offered assistance during past natural disasters, such as floods in 2010 and a 2005 earthquake.

Though Islamabad has yet to comment on the potential aid from India, Pakistan’s Finance Minister Miftah Ismail recently said the government would “consider importing vegetables and other edible items from India.” Pakistan previously cut trade ties with India, its longtime rival, over a dispute regarding India’s Muslim-majority Jammu and Kashmir regions, only making a handful of exceptions since 2019.

The flooding in Pakistan was caused by an abnormally strong monsoon season, driving torrential downpours which have left large swaths of land under water. Nearly 1 million homes have been damaged as a result, with Pakistan’s climate minister saying the floods have created a crisis of “unimaginable proportions.”