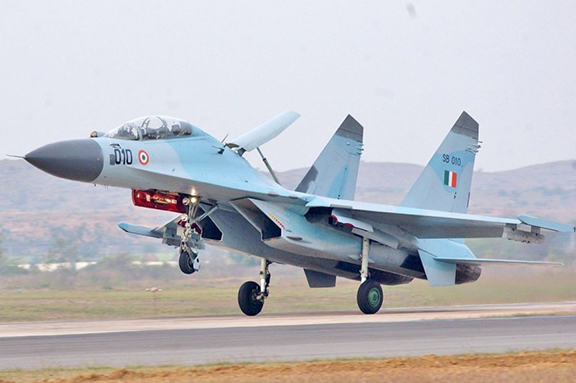 It follows the completion of the ‘captive trials’ of the missile on the Su-30. Made by Israel’s Rafael Advanced Systems, the Derby has an active radar seeker and a dual-pulse rocket motor with a range of 100 to 140 kilometers and a speed of Mach 4.
The Derby has already been integrated onto the LCA Tejas Mk1, where it was first test-fired from the jet on February 5, 2016. The test was carried out at Jamnagar, part of the LCA’s Final Operational Clearance (FOC).
On the Su-30MKI, the I-Derby ER is expected to replace the aging Russian-made R-77 ‘Vympel’ AAMs.
The IAF had also considered the shorter-range Advanced Short Range Air-to-Air Missile (ASRAAM), produced by the European defense consortium MBDA, for the Su-30MKI. Unlike the Russian Su-30SM, the MKI version includes Israeli and French avionics.
This includes a French-made heads-up display system, an Israeli electronic warfare system, and a targeting pod. Interestingly, an earlier surface-to-air version of the I-Derby is also part of the IAF’s 18 Spyder Quick Reaction-Surface to Air Missiles (QR-SAM), acquired from Rafael in 2008-2009 for an estimated $1 billion.
After the Astra Mk1, the Derby will be the second powerful AAM integrated with the Su-30 as the IAF prepares to phase out the R-77s.
Its deficiencies in range put the IAF Su-30s at a severe disadvantage over the Pakistani F-16s that fired the AIM-120 C-5 Advanced Medium Range Air-to-Air Missile (AMRAAM) on February 27 in the aerial battle near the volatile Line of Control.
The absence of a Software Defined Radio (SDR) on Group Captain Abhinandan’s MiG-21 (then a Wing Commander) also made it susceptible to jamming, because of which he could not hear the ground controller’s instruction to turn back.
A poor radar on the Su-30s that failed to detect some of the Pakistani jets were other shortcomings in the IAF inventory.
Sputnik had reported in June 2019 that India would require permission from the Russian Original Equipment Manufacturer (OEM), in this case, the Sukhoi Design Bureau, to make any modifications on the frontline fighter, as per the technical license documentation.

While the IAF has the 150-kilometer range Meteor BVR on the Rafale, French defense major MBDA ruled out helping integrate it onto Russian aircraft like the Su-30 or even older French-origin fighters like the Mirage-2000.
Even buying other Meteors is being avoided given the missile’s prohibitive costs. The IAF is known to throw its weight behind the indigenously developed Astra Mk1, Mk2, and the under-development Mk3.
The domestic origin also allows constant upgrades in electronics like Electronic Counter Measures (ECM) and propulsion, bringing it on par with foreign missiles. Currently, the BVR missile with the longest range in the world is the Chinese PL-15, which can reach 300 kilometers.

This isn’t the first time India has tried to marry an Israeli weapons platform on some of its inventory’s legacy Russian and French origin jets.
In 2008, when the R-530D Magic II missiles on the Mirage-2000 were turning obsolete, Israel helped fuse the Russian R-73 missile onto it with its Display and Sight Helmet System (DASH).
DASH is a Helmet Mounted Display (HMD) where readings on the screens inside the cockpits are beamed on the helmet’s visor itself, which reduces the stress of flying. The ergonomic ease allows the pilot to focus more on combat and less on controlling the aircraft.
Left without any AAMs for the Mirage-2000, IAF decided to take Israel’s help and combined the R-73 with the delta-wing fighter after the French.
The Russians refused, fearing revealing their missile and aviation technologies. Israel’s Elbit then devised new algorithms to make the French radar ‘talk’ to the Russian missiles, as it worked without the source codes.

UN voices concern over outbreaks of diseases in flooded Pakistan