Iran opens consulate in Armenia’s Kapan as it expands ties 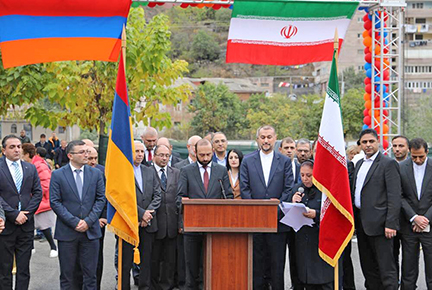 Tehran, Iran – Iran has opened a consulate general in Kapan, located in the southernmost Armenian province of Syunik, in what appears to be a direct message to Azerbaijan and its backer Turkey.

Iranian foreign minister Hossein Amirabdollahian officially inaugurated the consulate on Friday, making Iran the first country to establish a diplomatic mission in the province that is sought by Baku and Ankara.

The move appeared to come in support of Tehran’s assertion that any changes in its borders and transit links with Armenia would be a “red line” that it would not tolerate being crossed.

Azerbaijan – which also has a border with Iran – and its ally Turkey wish to establish a new transport link connecting Azerbaijan’s exclave of Nakhchivan with the Azerbaijani mainland, a route they call the “Zangezur corridor”.

If the route is established, in effect bypassing Armenian checkpoints, it will have consequences for Iran-Armenia commerce and could sever a major Iranian transit link with the South Caucasus.

Yerevan has also said the corridor signals a breach of the ceasefire signed after the 2020 Nagorno-Karabakh war, which Azerbaijan won, taking back territories that had been in Armenian control since the previous conflict in the early 1990s.

Iran’s top diplomat, who led a high-level delegation to Armenia, met with Armenian Prime Minister Nikol Pashinyan in Yerevan on Saturday. He has also held talks with his counterpart Ararat Mirzoyan and Alen Simonyan, the president of the National Assembly of Armenia.