Iran rejects the choice between a nuclear agreement or Russian relations 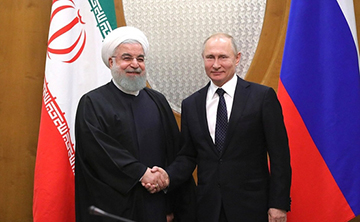 Iran announced on Friday its refusal to choose between reviving the nuclear agreement or establishing relations with Russia, stressing that this bilateral relationship is “false”.
Iranian Foreign Ministry Spokesperson Nasser Kanaani posted on Twitter: “False dichotomy btwn JCPOA (of which Iran, unlike US, remains a party) & good ties btwn Iran & its neighbors, inc. Russia doesn’t hide the fact that indecision of the unfaithful US is the main hurdle for a deal [sic].”
On Wednesday, the US Special Representative for Iran affairs Robert Malley disclosed in an interview with CNN that Iran had to choose between reviving the nuclear agreement or staying with Russia, which he described as “internationally isolated”.
Malley added that the opportunity to revive the nuclear agreement is narrowing day by day, stressing that Washington is seeking to prevent Iran from acquiring nuclear weapons.
On Thursday, US State Department Spokesperson Ned Price accused Iran of joining its fate with a small number of initially neutral countries that eventually supported President Vladimir Putin in his war against Ukraine and the Ukrainian people.
During his press conference, Price called on Tehran to return to the nuclear agreement, describing it as the best solution.
Price added that US sanctions would remain in effect against Iran unless it returns to implementing its commitments to the nuclear agreement. He added that it has not yet taken the necessary political decisions for mutual compliance with the agreement concluded in 2015, which the previous US administration withdrew from in 2018.
On Thursday evening, Iranian Foreign Minister Hossein Amir Abdollahian reiterated his country’s position on the stalled negotiations to revive the nuclear agreement, stressing that his country was serious about reaching a strong and sustainable deal.
In an interview with Iran TV, Abdollahian rejected Washington’s accusation of obstructing the revival of the nuclear agreement, describing this accusation as “false”.
He stressed that his country would continue indirect negotiations with the US, saying that the latter asked Iran through mediators to settle the file of the assassination of the former commander of the Quds Force, General Qasem Soleimani. Abdollahian emphasised the rejection of the request, noting that the case would not be closed and that avenging the commander was their duty.
The Iranian minister explained that the draft agreement is “96per cent complete”, stressing that it lacks “guarantees to secure our economic interests.”
The Vienna nuclear negotiations, launched in April 2021, are still at a standstill since 11 March. They continued in the form of indirect talks between Tehran and Washington through European Union representative Enrique Mora, who wastasked with coordinating the negotiations.