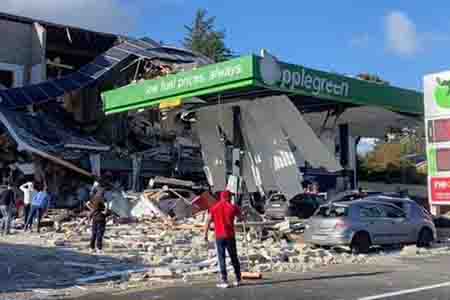 Creeslough , Ireland, Oct 8 (AFP/APP): At least nine people have been killed in an explosion at a petrol station in County Donegal in Ireland’s northwest, police said on Saturday.
The Garda Siochana police force said eight people had been hospitalised and that it “can now confirm nine fatalities as a result of this incident.
“The search and recovery for further fatalities continues” at the site in the village of Creeslough,” it said.
The cause of the explosion remained unknown, and police had yet to announce the launch of an inquiry as the search through rubble went on.
The toll from Friday’s explosion had already risen from three to seven overnight.
Rescue efforts by Ireland’s emergency services went on through the night after the blast ripped through a petrol station forecourt and a nearby apartment complex.
An aerial photograph was taken after the explosion showed the petrol station building destroyed.
Two two-storey residential buildings behind had collapsed, while the facade of a similar adjacent building was blown off.
Resident Kieran Gallagher, whose house is about 150 metres (500 feet) from the scene, said the blast sounded like a “bomb”.
“I was in my house at the time and heard the explosion. Instantly I knew it was something — it was like a bomb going off,” he told the BBC.
At a service at the local church on Saturday morning, Father John Joe Duffy said the community had been hit by “a tsunami of grief”.
Many emergency services vehicles remained at the scene overnight, including fire services from both sides of the border with British-run Northern Ireland.
Gardai and civil defence were also involved, and a coastguard helicopter airlifted some of the injured from Letterkenny University Hospital to the capital Dublin.