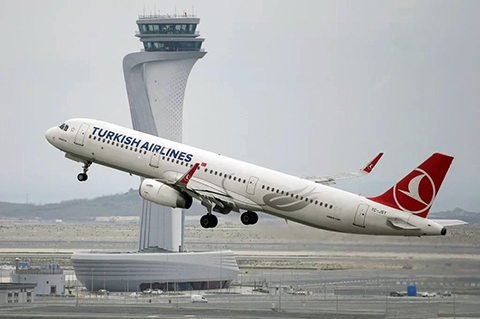 “The agreement is expected to result in the resumption of flights by Israeli companies to a variety of destinations in Turkey, alongside flights by Turkish companies to Israel,” the ministry said in a statement.
Last month Yair Lapid, the Israeli prime minister who was at the time foreign minister, hailed security cooperation with Turkey in helping foil an alleged Iranian plot to kidnap or kill Israeli nationals in Istanbul, as he met his counterpart in Ankara for high-level talks aimed at cementing the countries’ rapprochement.
In March, Israeli President Isaac Herzog met with Turkish President Recep Tayyip Erdogan in Ankara, the first visit by an Israeli head of state to Turkey since 2008.
Herzog’s visit came after more than a decade of strained relations between the two countries during which Turkey gave vocal support for the Palestinian cause and criticised Israeli policies.
Relations between Turkey and Israel nosedived after Israeli commandos raided a Gaza-bound flotilla carrying aid in 2010 and killed 10 Turkish civilians in international waters.
The flotilla, led by the Mavi Marmara ship, was an attempt to bring urgently needed humanitarian supplies to the besieged people of Gaza and shine a spotlight on the Israeli-imposed blockade of Gaza.
Ties were fractured again in 2018, when Israeli forces killed dozens of Palestinians taking part in the Great March of Return protests in Gaza, as the protesters demanded the implementation of refugees’ right of return and an end to the 15-year crippling blockade.
Turkey recalled all of its diplomats and ordered Israel’s envoy out of the country.
Experts believe Turkey and Israel began to move closer and cooperate following events in Nagorno-Karabakh in 2020 and then in Afghanistan in 2021.
However, the Hamas movement, which governs Gaza and maintains strong relations with Ankara, condemned Herzog’s visit, and reiterated its policy of rejecting “any form of communication with our enemy”.