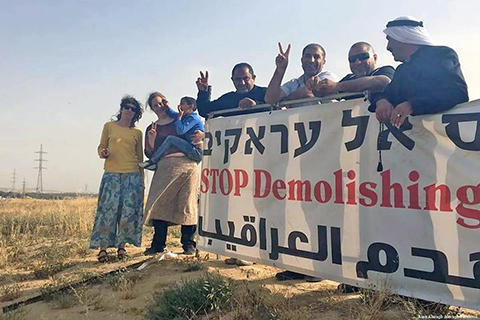 Aziz Al-Turi, a member of the Local Committee for the Defence of Al-Araqeeb, said that the Israeli forces raided the village and demolished its homes for the 29th time.
Al-Turi stressed that the people of the village “will rebuild their village”.
The last time that the Israeli authorities demolished the homes in the village was in late October.
The homes in Al-Araqeeb are built of wood, plastic and tin, in which 22 families live.
The Israeli authorities first demolished the village in July 2010 and, since then, they have been returning to demolish the homes every time the residents rebuild them.
The Israeli government does not recognise Al-Araqeeb, but its residents insist on remaining on their land despite the repeated demolition of their homes.
In a past report, Zochrot, an organisation of Israeli Jewish and Arab activists which documents the Palestinian Nakba of 1948, said that Al-Araqeeb was built for the first time during the Ottoman period on land purchased by the residents.
The organisation says that the authorities are working to expel the residents of the village in order to control their land, noting that Israel does not recognise dozens of other villages in the Negev region, and refuses to provide any public services to them.