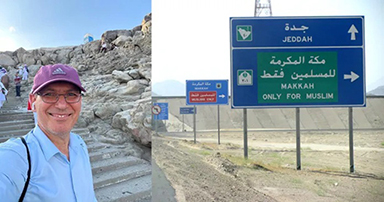 According to Bloomberg, in his report, journalist Gil Tamari noted that “Mecca is a holy city for Islam and non-Muslims aren’t allowed to enter”.
“I am the first Israeli journalist to broadcast from here, even in Hebrew”, said Tamari.
He went on to climb Saudi Arabia’s Mount Arafat, sparking controversy on social media and illustrating the sensitivities of closer ties between the kingdom and Israel. Highlighting that it was his dream to visit Makkah, Tamari said the person who agreed to take him didn’t know he was an Israeli journalist.

The report and video of Tamari on a drive through Makkah comes days after US President Joe Biden took the first nonstop flight from Israel to Saudi Arabia. The kingdom announced a day earlier that it was opening its airspace to Israeli carriers and flights from Israel.
In 2020, Israel signed US-sponsored agreements to normalise relations with the United Arab Emirates, Bahrain, Sudan and Morocco. Saudi Arabia, which has secret ties with Israel, has yet to join the agreement.