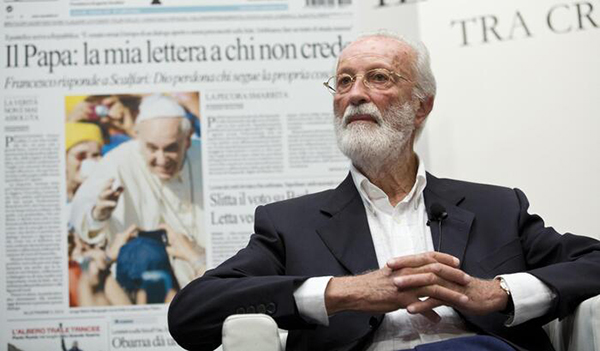 LONDON: Italian journalist Eugenio Scalfari, considered by many to have revolutionized Italian journalism, died on Thursday at the age of 98.
In 1978, Scalfari founded La Repubblica, one of the country’s leading newspapers, where he held the position of editor-in-chief for its first 20 years.
La Repubblica changed Italian print media by helping popularize the tabloid format, which provided readers with an alternative to the more traditional broadsheet layout.
“Eugenio Scalfari combined the main qualities of La Repubblica’s editorial team: Innovation and reformism,” Maurizio Molinari, the current editor-in-chief of La Repubblica, told Arab News.
“Innovation in terms of the newspaper’s relationship with journalism, and reformism in its adherence to the values of liberal socialism and equality.”
The news of his death was reported by the paper he founded and announced by the Senate during a bill debate, where a minute of silence was held to honor one of the pioneers of Italian journalism.
“Between constant curiosity about new digital technologies, passion for the transformations of Italy, and attention to the European horizon, Scalfari’s words and thoughts made me aware of the strength and energy of the newspaper,” Molinari added.
Italian Prime Minister Mario Draghi mourned the late journalist in a statement, saying that “Scalfari’s passing … leaves a gaping hole in our country’s public life.
“The clarity of his prose, and depth of his analyses (and) the courage of his ideas have accompanied Italians for over 70 years,” Draghi added, describing the journalist’s writings as “essential reading.”
Since its inception, the left-leaning Rome-based daily has achieved great success on Italy’s already crowded newsstands, and is praised by its readers for its fresh writing style and punchy headlines.
A law graduate, Scalfari began his career working for the influential postwar magazines Il Mondo and L’Europeo, before co-founding the Radical Party in 1955.
In October of the same year, he co-founded L’Espresso, one of Italy’s foremost news magazines.
He was highly praised for his writing, which consisted of weekly columns and investigative articles, in which he often explored controversial and difficult topics ranging from the economy to philosophy to religion.