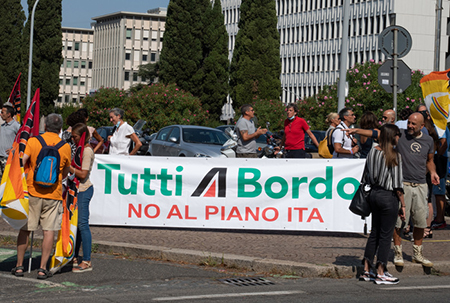 Rome, July 13 (AFP/APP): Air traffic controllers and airline workers from three low-cost airlines will hold a limited strike across Italy at the weekend, three unions announced Wednesday.
The four-hour national strike will involve air traffic controllers from Italy’s ENAV group, and pilots and flight attendants from EasyJet, Volotea and RyanAir, unions Filt-Cgil, Fit-Cisl and Uiltrasporti said.
The strike comes at the height of Italy’s busy summer season and just days after a strike by taxi drivers over competition from Uber.
The unions said air traffic controllers were suffering from Enav’s “manifest inability to communicate and manage personnel”, and threatened further protests if demands were not met.
Uiltrasporti said pilots and flight attendants from the low-cost airlines were working under “continuing unacceptable conditions”, accusing EasyJet of unjustified dismissals and Volotea of lowering minimum wages.
It said it had asked Italy’s Ministry of Infrastructure to open an “air transport crisis table” involving low-cost airlines to deal with wage and working condition issues.
EasyJet said in a statement it had been informed of the planned strike from 2:00 pm to 6:00 pm Sunday and said it was “doing everything possible to minimise any impact and limit disruption.”
ENAV, Volotea and RyanAir did not immediately respond to an after-hours request for comment.