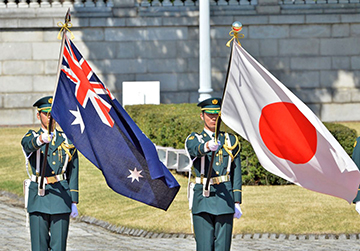 Perth, Australia, Oct 22 (AFP/APP): Australia and Japan agreed to share sensitive intelligence and deepen defence cooperation Saturday, signing a security pact to counter China’s military rise.
Prime ministers Fumio Kishida and Anthony Albanese inked the accord in the Western Australian city of Perth, revamping a dusty 15-year-old accord drafted when terrorism and weapons proliferation were the overriding concerns.
Under the deal, the countries’ defence forces will train together in Northern Australia, and “expand and strengthen cooperation across defence, intelligence sharing” and a raft of other areas, Australian officials said.
“This landmark declaration sends a strong signal to the region of our strategic alignment”, said Albanese, hailing the “Joint Declaration on Security Cooperation”.
Kishida said the agreement was a response to an “increasingly harsh strategic environment”, without citing China or North Korea by name.
Neither Australia nor Japan has the ranks of overseas intelligence operatives and foreign informants needed to play in the major leagues of global espionage.
Japan does not have a foreign spy agency equivalent to America’s CIA, Britain’s MI6 or Russia’s FSB. Australia’s ASIO is a fraction of the size of those organisations.
But according to expert Bryce Wakefield, Australia and Japan have formidable signals and geospatial capabilities — electronic eavesdropping tools and high-tech satellites that provide invaluable intelligence on adversaries.
Wakefield, director of the Australian Institute of International Affairs, said the agreement is another signal that Japan is becoming more active in the security arena.
“It is a significant agreement in that Japan hasn’t overtly worked with partners outside the United States on security,” he said. “It may actually end up being a template for cooperation with other countries, for example, the United Kingdom.”
Some even see the accord as another step toward Japan joining the powerful Five Eyes intelligence-sharing alliance between Australia, Britain, Canada, New Zealand and the United States.
It is “an epoch-making event that Japan can share SIGINT with a foreign nation except for the United States”, Ken Kotani, an expert in the history of Japanese intelligence at Nihon University, told AFP.
“This will strengthen the framework of the Quad (Australia, India, Japan and the United States) and is the first step for Japan to join the Five Eyes,” he added.

Such a suggestion would have been unthinkable a few decades ago, but events in Japan’s neighbourhood have forced a rethink of the country’s pacifist policies established in the wake of World War II.
In recent years North Korea has repeatedly lobbed missiles over and around Japan, while China has built the world’s largest navy, revamped the globe’s biggest standing army, and amassed a nuclear and ballistic arsenal right on Japan’s doorstep.
But hurdles remain for Tokyo’s closer security cooperation with allies.
Japan’s intelligence sharing with allies has been hampered by longstanding concerns about Tokyo’s ability to handle sensitive confidential material and transmit it securely.
“To put it bluntly Japan has traditionally leaked like a sieve,” said Brad Williams, author of a book on Japanese intelligence policy and a professor at the City University of Hong Kong.
Laws have been introduced to more severely punish intelligence leaks, but for now, Australia will likely be forced to scrub any intelligence it passes to Japan for information gleaned from the Five Eyes network.

Prime ministers Kishida and Albanese also vowed more cooperation on critical minerals, the environment and energy.
Japan is a major buyer of Australian gas and has made a series of big bets on hydrogen energy produced in Australia as it tries to ease a lack of domestic energy production and dependence on fossil fuels.
“Japan imports 40 percent of its LNG from Australia. So it’s very important for Japan to have a stable relationship with Australia, from the aspect of energy,” a Japanese official said ahead of the meeting.
A memorandum of understanding on critical minerals will see Japan tap Australia’s supply of rare earths, which are crucial in producing everything from wind turbines to electric vehicles.
China currently dominates world production of critical minerals, leading some to worry that supplies could be cut for political reasons.