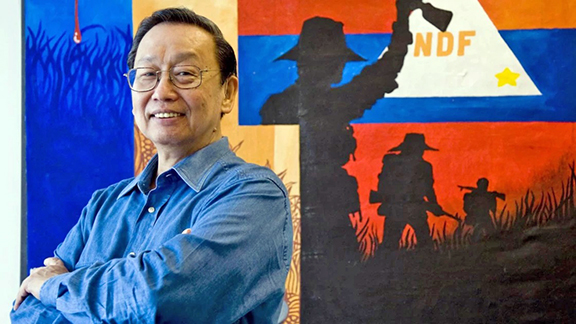 Manila, Dec 17 (AFP/APP): Jose Maria Sison, who launched one of the world’s longest-running Maoist insurgencies, has died at 83, the Communist Party of the Philippines announced Saturday.
The former university professor died in the Netherlands, where he had lived in self-imposed exile since the collapse of peace talks in 1987 when the rebellion that has claimed tens of thousands of lives was at its peak.
“Sison… passed away at around 8:40 p.m. (Philippine time) after two weeks’ confinement in a hospital in Utrecht,” the party said in a statement, without specifying the cause of death.
“The Filipino proletariat and toiling people grieve the death of their teacher and guiding light.”
The Philippines’ defence ministry said his death could finally lead to an end to violence in the country, calling Sison the “greatest stumbling block” to peace.
“The death of Sison is but a symbol of the crumbling hierarchy” of the communist movement, it said, calling for remaining rebels to surrender.
“A new era without Sison dawns for the Philippines… Let us now give peace a chance.”
Sison had hoped to overthrow the government and establish a Maoist regime that would end “US imperialism” in the former American colony.
The US State Department designated the communist party and its armed wing foreign terrorist organisations in 2002.

The ongoing armed struggle, launched in 1969, grew out of the global communist movement, finding fertile soil in the Philippines’ stark rich-poor divide.
Recruitment for the rebellion also benefited from Ferdinand Marcos’s 1972-1986 dictatorship, when the legislature was shuttered, the free press muzzled and thousands of opponents tortured or killed.
At its peak in the 1980s, the group boasted about 26,000 fighters, a number the military says has now dwindled to a few thousand.
Since 1986, successive Philippine administrations have held peace talks with the communists through their Netherlands-based political arm, the NDF.
The 2016 election of former president Rodrigo Duterte — a self-declared socialist and a former student of Sison — brought a burst of optimism for peace talks.
But the talks later devolved into threats and recrimination, with Duterte officially cutting them off in 2017, declaring the group a terrorist organisation and accusing them of killing police and soldiers while negotiations were under way.
In recent years, the government has claimed that hundreds of communist rebels have surrendered in exchange for financial assistance and livelihood opportunities.
Deadly clashes still take place in different parts of the country, which is also plagued by kidnap-for-ransom groups and Islamist secessionist movements in the southern region.