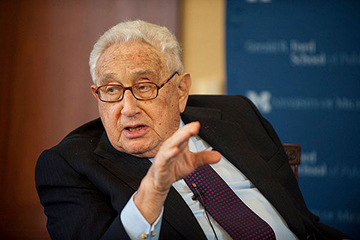 Washington: Urgently negotiating an end to hostilities in Ukraine would prevent another world war, former US secretary of state Henry Kissinger argued in an essay published on Friday. The 99-year-old statesman noted that, in 1916, the US government had the chance to end the First World War through diplomacy, but missed it for reasons of domestic politics.

Kissinger laid out his reasoning in the December 17 issue of The Spectator, describing the current conflict as a “war in which two nuclear powers contest a conventionally armed country,” a clear reference to Ukraine being a proxy war between the US and Russia.

The “peace process” Kissinger proposes would “link Ukraine to NATO, however expressed,” as he believes neutrality for Kiev is no longer an option. He also wants Russia to withdraw to the lines before February 24, while the other territories Ukraine claims – Donetsk, Lugansk and Crimea – “could be the subject of a negotiation after a ceasefire.”

In addition to “confirming the freedom of Ukraine,” the arrangement would strive to “define a new international structure, especially for Central and Eastern Europe,” in which Russia should “eventually” find a place, he explained.

While some would prefer “a Russia rendered impotent by the war,” Kissinger disagrees, arguing that Moscow’s “historical role should not be degraded.” Dismantling Russia could turn its vast territory into a “contested vacuum,” where “competing societies might decide to settle their disputes by violence” and neighbors could seek to claim territory by force, all in the presence of “thousands of nuclear weapons.”

In substance, this is the same proposal Kissinger had first floated in May, for which he was labeled an enemy of Ukraine and added to the notorious ‘Peacemaker’ kill list. In an interview earlier this month, Ukrainian President Vladimir Zelensky categorically rejected any sort of ceasefire that did not take Kiev’s claimed 1991 borders as the starting point.

It was also unclear whether Moscow would accept any Western-mediated ceasefire at all, after former German Chancellor Angela Merkel’s admission that the 2014 Minsk armistice was intended to “give Ukraine time” to prepare for war.

What’s fresh in Kissinger’s Spectator essay is his reasoning. He points to August 1916, at the height of the First World War, when the warring powers sought US mediation to end the unprecedented bloodshed. Though “a peace based on the modified status quo ante was within reach,” President Woodrow Wilson delayed the talks until after he could get re-elected in November. By then it was too late, and the war would go on for two more years, “irretrievably damaging Europe’s established equilibrium.”

Asked about Kissinger’s proposal, Kremlin spokesman Dmitry Peskov said Russian President Vladimir Putin was “eager to give the article a thorough reading,” but “hasn’t had a chance to do so yet, unfortunately.”

Russia sent troops into Ukraine on February 24, citing Kiev’s failure to implement the Minsk agreements, designed to give the regions of Donetsk and Lugansk special status within the Ukrainian state. The Kremlin demanded that Ukraine officially declare itself a neutral country that would never join any Western military bloc. Kiev insists the Russian offensive was completely unprovoked.