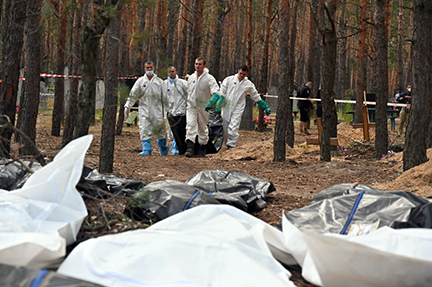 Kupiansk, Ukraine, Sept 20 (AFP/APP): The Kremlin on Monday denied its forces were responsible for large-scale killings in east Ukraine and accused Kyiv of fabricating its discoveries of mass graves in the recaptured territory.
In the latest incident spurring fears of an atomic emergency, Ukraine said Russian rockets landed dangerously close to a nuclear power station in southern Ukraine.
Ukraine recaptured Izyum and other towns in the east this month, crippling Kremlin supply routes and bringing fresh claims of Russian atrocities with the discovery of hundreds of graves — some containing multiple bodies.
“These are lies,” Kremlin spokesman Dmitry Peskov told reporters on Monday. Moscow, he said, “will stand up for the truth in this story”.
Fighting in the northeast has raged and AFP journalists heard artillery exchanges in frontline Kupiansk on Monday, as traumatised civilians headed out of the town now mainly in Ukrainian hands.
The streets were strewn with broken glass, spent cartridge casings and the discarded remains of ration packs issued by both forces.
Most of the fire was outgoing, with Ukrainian tanks and artillery targeting Russian positions on the west side of the town, over a mess of broken bridges. A column of smoke rose in the distance.
At the entrance to the town, cowering from the sounds of Ukrainian tank shells passing overhead towards Russian lines, civilians gathered to hitch rides or join buses to head out into safer Ukrainian territory.
“It was impossible to stay where we were living,” said 56-year-old Lyudmyla, who braved the constant crack of shells to cross the Oskil river from the disputed east bank to the relative safety of the west.
“There was incoming fire not just every day, but literally every hour. It’s very tough there, on the other bank of the river.”
In his address to the nation on Monday, Ukrainian President Volodymyr Zelensky said the Russians were “panicking” as his forces held recaptured territory in the northeastern Kharkiv region.