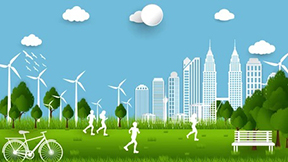 Kuwait has unveiled plans to develop a completely carbon-free green city, to be named XZERO, Al-Seyassah has reported. It is planned to be the largest of its kind in the world and the first in the Middle East.

The construction of the eco-city is said to be in line with the strategy set out by Kuwait’s Vision 2035 and will be considered to be the “world’s most walkable city,” said the Daily Mail. XZERO will be designed in the shape of a flower and will consist of hubs dedicated to various public facilities such as education, healthcare, and entertainment.

The project aims to provide a net zero-carbon lifestyle for some 100,000 residents and will be built by UAE-based global sustainable developer URB. More than 65 percent of the project’s land area will be set aside for open spaces.

“The creation of sustainable cities that follow the highest standards of living with the lowest impact on the environment is no longer a choice, it has become a necessity,” the CEO of URB, Baharash Bagherian, was quoted as saying. “XZERO is planned with multi-functional holistic solutions that address the three key pillars of sustainability: social, economic, and environmental.” The heart of this project is the unique resilient landscape, which is multifunctional and designed to promote health, well-being, and biodiversity, added Bagherian.

The firm reportedly disclosed to the MailOnline that the estimated cost of the project will be $15 billion, with construction scheduled to commence in 2024 and completed over a 10-year period.

URB is currently working on plans for the world’s largest net-zero carbon urban tech district which will be situated in Dubai’s Al-Jaddaf Creekside. That too is estimated to begin by 2024 to be completed in two phases by 2030.