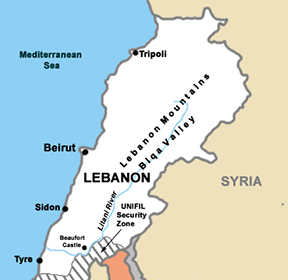 BEIRUT: Lebanon has been plunged into darkness after oil stocks in the country’s last functional power plant in Deir Ammar ran out on Tuesday morning.
Lebanon exhausted its oil stock, which it imports from Iraq, during the parliamentary elections to ensure power was maintained during the electoral process. The country has to wait for an oil tanker to arrive at the end of the week, then wait some more until the oil is tested before it can be unloaded.
Elsewhere, the Beirut and Mount Lebanon Water Establishment has announced that it has been “reluctantly forced” to subject the locations to “severe and harsh” water rationing.
The shortage of diesel, the steady rise in prices and the extensive power cuts are hindering pumping stations from providing water supply, the authorities said, warning of further deterioration. The water establishment added that should any pumping station go out of service, securing the needed funds to repair it would be close to impossible.
The Lebanese have for many years provided alternatives to the basic state services, including a mass market for power generators. However, hundreds of thousands can no longer afford any of these alternatives.
On Tuesday, the local currency hit a new record low, trading at 34,100 Lebanese pounds to the dollar on the black market.
Pharmacy owners staged a sit-in in front of the Ministry of Health on Tuesday to demand “implementing the laws of delivering medicines to pharmacies and fighting the phenomenon of smuggling drugs outside Lebanon, specifically to Syria.”
Dr. Joe Salloum, head of the Pharmacists’ Syndicate, said patients are being subjected to several types of fraud. “Some cancer patients bought medicine that turned out to be counterfeit, while the state and the ministry fails to draw up a solid plan to provide necessary, quality medication.”
He added: “Leaving room for smuggled and counterfeit medicine amid chaos and fraud threatens the lives of patients, if they can even afford to buy any medicine.”
Salloum said the whole mess could have been avoided if the medication card had been approved two years ago. “(It looks) as if there was a plan to destroy the entire sector, including pharmacies, importing companies, and Lebanon’s medical identity.”
Amid the chaos, Prime Minister Najib Mikati’s government has entered into caretaker mode after failing to approve an electricity plan.
The picture in the newly elected parliament remains blurred as MPs struggle to find ground with the new reformist MP surge.
Mikati revealed that Energy Minister Walid Fayyad deliberately obstructed the offers submitted by General Electric and Siemens in agreement with international groups to supply Lebanon with electricity at a reasonable price.
Mikati said Fayyad withdrew the file from the Cabinet’s agenda 15 minutes before the final session was held on May 21, claiming the offers needed “further reviewing.”
Mikati insisted on pursuing the issue and asked Fayyad “to dare to name the person who asked him to withdraw the file from the Cabinet’s agenda and why,” in an indirect reference to Gebran Bassil, head of the Free Patriotic Movement.
“The government had decided to negotiate with four international companies, namely Ensaldo, Mitsubishi, General Electric and Siemens on the possibility of providing Lebanon with generators needed to produce 24-hour electricity permanently,” Mikati said, adding: “General Electric and Siemens, in agreement with international groups, made offers to supply Lebanon with electricity before next summer at a very reasonable price, even about the price of gas for energy production, and we simply needed to draw up the terms of reference following the applicable laws.”
A source close to Mikati said: “The cost of preparing the terms of reference was agreed upon with the French side but without any warning. President Michel Aoun’s political team decided to withdraw the file from the Cabinet’s agenda in refusal to record achievement in securing electricity for a government in which the FPM is not directly present.”
Aoun’s meeting on Tuesday with Anne Grillo, the French ambassador to Lebanon, focused on the upcoming elections and the Lebanese-French cooperation in all fields. Grillo conveyed French President Emmanuel Macron’s continued support for Lebanon and its people.
During the Fifth Saudi-Lebanese Cultural Forum, held on Monday evening at the residence of Walid Bukhari, the Saudi ambassador to Lebanon, he spoke about Mufti Sheikh Hassan Khaled, who was assassinated in an explosion targeting his convoy on May 16, 1989.
“His assassination was a prelude to the assassination of all of Lebanon, which is experiencing difficult circumstances, foremost of which is the targeting of its Arab identity and its relationship with its Arab environment.”
Bukhari also mentioned the “martyrdom” of Lebanon and the Arab world regarding the assassination of former Prime Minister Rafik Hariri.
“We know Sheikh Khaled would be happy with the results of the honorable elections and the downfall of all symbols of treachery, betrayal, death and hate,” Bukhari said.
Speaking at the forum, Lebanon’s Grand Mufti Sheikh Abdel Latif Derian stressed the comprehensive role that Sheikh Khaled played “so that the political quorum and Beirut remain standing, lest the divisions of the war affect the relations between Muslims and Christians, the sons of one nation.”