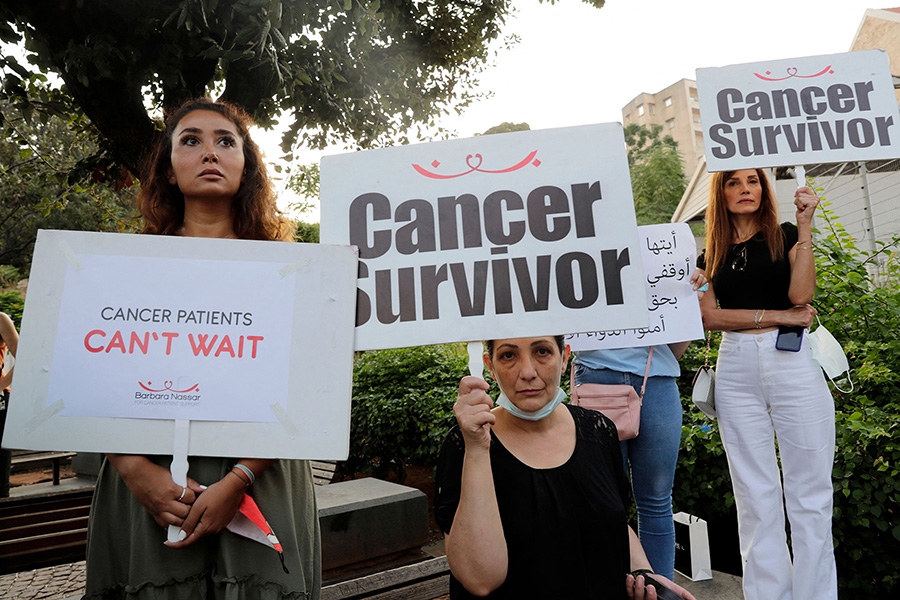 DUBAI: “I am Sali Hafiz. I came today to take the deposits of my sister who is dying in a hospital.” These are the words that a desperate Lebanese woman streamed online in a bid to secure funds for her sister’s cancer treatment.

Hafiz had stormed into a Beirut branch of BLOM Bank armed with a fake gun. The 28-year-old held up the premises until she secured $13,000, part of her $20,000 savings in held deposits.

The heist highlights the ever-worsening state of Lebanon’s medical sector and its patients. Hafiz’s sister, who suffers from brain cancer, was losing hope of ever regaining her speech and mobility. The funds withdrawn by her sibling provided her with a trip to nearby Turkey and a month of treatment.

For more than four years, Lebanon has been in the throes of a deepening economic crisis that has plunged almost three-quarters of the population into poverty.

It has left the healthcare sector on its knees, slashed medical subsidies from $120 million per month to about $35 million in 2021 and raised the price of a wide range of medications by up to four times. Desperate Lebanese citizens are now looking for any means to provide their loved ones a chance in life.

In Lebanon, cancer patients fight two battles — one against their disease and another to obtain much-needed treatment.

Breast cancer is the most prevalent cancer in Lebanon. In 2020, 1,954 new breast cancer cases were identified, accounting for 33.7 percent of diagnosed cancers that year.

According to a 2019 study, “Breast Cancer Epidemiology Among Lebanese Women: An 11-Year Analysis,” published in the National Center for Biotechnology Information, a study period between 2005-2015 found breast cancer to be the most prevalent cancer in Lebanon with a total of 22,357 cases reported, accounting for almost 37 percent of cancer cases among females.

In 2018, the Eastern Mediterranean Health Journal published a study titled “Effectiveness of breast cancer screening campaigns from 2012 to 2017 by analysis of stage at diagnosis, Lebanon.” It found that the country had the sixth highest age-standardized incidence rate for breast cancer in the world, with 97.6 cases per 100,000 women.

Hospitals now face significant medication shortages, and a large number of patients cannot afford treatment due to the capital controls imposed almost overnight by banks in 2019.

More than 80 percent of the population lives below the poverty line.

Many breast cancer patients are in the same predicament as Hafiz’s sister.

Though ongoing campaigns in the country raise awareness of breast cancer during October, many women feel discouraged. Public awareness efforts include seminars, educational courses on how to spot breast cancer, encouragement for early screening and media interventions. But those already diagnosed with breast cancer feel that it is not enough.