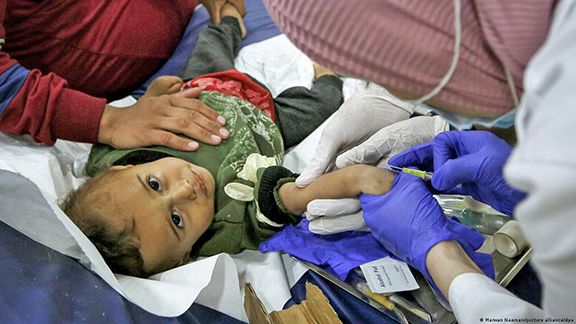 BEIRUT, Dec. 8 (Xinhua/APP): Lebanese caretaker Health Minister Firas Abiad said on Wednesday that the cholera outbreak in Lebanon is under control given the limited number of confirmed daily cases, the National News Agency reported.
In the first phase of the vaccination campaign against cholera, 479,582 vaccines have been administered in four governorates, six districts, and 80 towns, with 42 percent going to Lebanese citizens, 46 percent to displaced Syrians, and 6 percent to Palestinians and other nationalities, Abiad told a press conference.
A new batch of vaccines is expected to arrive in December for the second phase of the vaccination campaign, which will target 900,000 residents in 295 Lebanese towns and some camps in Tripoli, Danniyeh, Baalbek, and the remaining villages of Akkar, he said.
Lebanon has so far confirmed 653 cholera cases, while the cumulative number, including suspected cases, stands at 4,912, with a death toll of 23.
On Oct. 6, Lebanon detected two confirmed cholera cases in the northern part of the country, marking the first cholera outbreak in Lebanon since 1993.