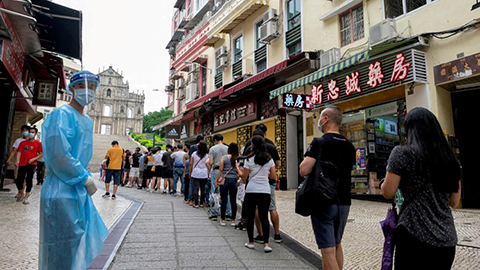 Hong Kong, July 11 (AFP/APP): Macau casino shares plunged on Monday as the Chinese city embarked on a week-long lockdown to curb its worst coronavirus outbreak while neighboring Hong Kong said it was mulling a mainland-style health code system.
Share prices of six gaming conglomerates — Sands China, Galaxy Entertainment, SJM Holdings, Melco International, MGM China, and Wynn Macau — dropped by between six and nearly nine percent in Monday morning trade.
It is the first casino lockdown in more than two years, overriding a previous deal between the industry and the Macau government that only those found with infections would need to close temporarily.
Macau, the world’s biggest gambling hub, is the only place in China where casinos are legal but the pandemic has hammered the city’s fortunes as it sticks to Beijing’s zero-Covid model.
While casinos have remained open throughout most of the pandemic they have seen a fraction of pre-Covid business.
A Bloomberg gauge of the city’s six licensed casino operators is down 20 percent this year.
Authorities announced a week of lockdowns starting Monday after recording more than 1,500 infections in the past three weeks despite multiple rounds of compulsory mass testing of the city’s 650,000 people.
All residents must stay home except to go shopping for daily necessities and to get tested for the virus, with rule-breakers facing up to two years in jail.
Some public services and businesses such as supermarkets and pharmacies can stay open, and only people with special permission or a low-risk health code can use public transport.
China uses mandatory health code apps to trace people’s movements and coronavirus outbreaks. Only those with green codes can move freely.
It is a system that Hong Kong’s government is now considering employing, new health minister Lo Chung-mau said Monday.
“So-called freedom can sometimes be easily confused with selfishness,” Lo told RTHK radio.
“Infected people should not have the freedom to go wherever they want and affect our health.”
Hong Kong is being remolded in the authoritarian mainland’s image after huge democracy protests three years ago.
The business hub has hewed to a lighter version of the zero-Covid model, which has battered the economy and left the city internationally cut off for more than two years.
The newly installed administration of chief executive John Lee, a former security official, has vowed to stamp out infections and restart travel to both the mainland and outside world.
To do that, authorities may need to deploy more mainland-style mass monitoring of the population.
Hong Kong currently uses a less restrictive mobile phone app than the mainland one, which keeps a resident’s vaccination record and is used to check into businesses and venues.