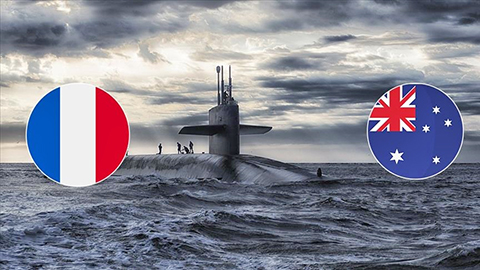 Bangkok, Nov 17 (AFP/APP): French President Emmanuel Macron said Thursday that an offer to cooperate with Australia on submarines still stood, after a bitter row over a canceled contract last year threatened to torpedo relations.
Macron was left furious when Australia’s previous prime minister Scott Morrison abruptly tore up a contract for France to build a dozen diesel-powered submarines and announced a deal to buy US or British nuclear-powered subs.
The row derailed relations and threatened to sink an EU-Australia trade agreement, but the two sides have made up since Prime Minister Anthony Albanese took power in Canberra.
The delivery of the new nuclear submarines could take years, potentially leaving Australia short of capacity at a time when China is increasing its assertiveness in the region.
Speaking in Bangkok a day after meeting Albanese on the sidelines of a G20 summit in Indonesia, Macron said the French offer “remains on the table”.
He said France would not supply nuclear submarines to foreign countries, so the offer related only to conventional vessels. He added it would guarantee Canberra’s “freedom and sovereignty”, noting that construction would be in Australia.
“We will now see how they adapt to the difficulties (they face),” Macron said.
“There is a fundamental choice, which is to know whether they produce submarines in their own country or rely on another — whether they go for nuclear or not.”