Massive protest in Paris against inflation and climate crisis 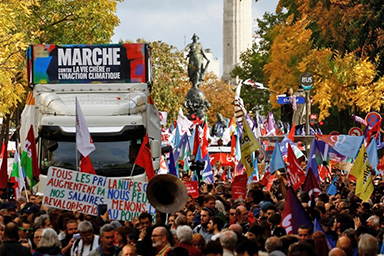 Tens of thousands of protesters marched in Paris adding to growing defiance and anger about inflation, three weeks into a refinery strike that caused fuel shortages across France.

The demonstration against the rising cost of living on Sunday was called by the left-wing political opposition and led by the head of the France Unbowed party, Jean-Luc Melenchon.

It was a show of anger against the bite of rising prices and to crank up the pressure on the government of President Emmanuel Macron.

Organisers called it a “march against the high cost of living and climate inaction”.

As well as calling for massive investment against the climate crisis, they also demanded emergency measures against high prices, including freezes in the costs of energy, essential goods and rent, and for greater taxation of windfall profits by corporations.

Opponents of Macron are hoping to build on the momentum created by the refinery standoff that began at the end of September.

Transport strikes called for Tuesday threaten to dovetail with wage strikes that have already hobbled fuel refineries and depots, sparking chronic gasoline shortages that are fraying nerves among millions of workers and other motorists dependent on their vehicles, with giant lines forming at petrol stations.