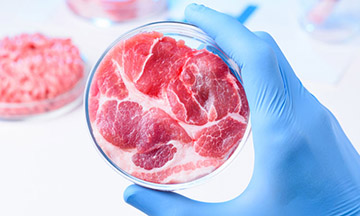 Cultivated meat, grown from animal cells in a lab or manufacturing plant, has been getting a lot of attention as a way to side-step the environmental toll of the meat industry and address concerns over animal welfare.

This method, however, has raised questions over religious restrictions, like kashrut in Judaism or Islam’s halal.

Jewish dietary law designates kosher meat as having come from a cow slaughtered in accordance with ritual – and requires that it be kept and consumed separately from dairy.

Chief Rabbi, David Lau, weighed in on the issue for the first time, telling the Israeli firm, Aleph Farms, which last year closed a $105 million funding round, co-led by Abu Dhabi’s ADQ, that the cultivated thin-cut steaks it hopes to start selling this year are indeed kosher.

Aleph Farms says it collects sample cells from a living animal and then grows more in a cultivator that mimics conditions in the animal’s body. This is different from popular plant-based alternatives that do not have animal origins.

In an 11-page letter dated 17 January to the company outlining the production process and referencing Jewish legal precedent, Lau said the product falls into the category of “parve” – meaning neither meat nor dairy. But he required it be clearly marketed as a meat alternative to avoid confusion with conventional meats.

While the decision was specific for Aleph Farm’s process, it sets a foundation for others. A spokesperson for Lau said they have received similar requests from a number of companies.

Aleph Farm CEO, Didier Toubia, called Lau’s ruling a “benchmark, a reference-point for many other kosher organisations in Israel and abroad.”

And beyond that, Toubia said, it was a first step that will hopefully be followed by certification in the much bigger halal food market and even approval for Hindus, many of whom consider cows holy and do not eat beef.

Aleph Farms, which has actor, Leonardo DiCaprio, as an advisory board member, hopes to start selling its cultured thin-cut steaks to Israeli restaurants this year, pending approval by the Health Ministry, and in Singapore.

It is working on approval from the US Department of Agriculture and Food and Drug Administration ahead of an expected roll-out there next year.