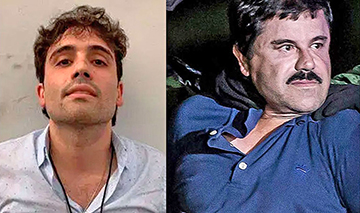 Ovidio Guzman, who was arrested in the northwestern city of Culiacan, is accused of leading a faction of his father’s notorious Sinaloa cartel, Defense Minister Luis Cresencio Sandoval told reporters. The 32-year-old, nicknamed “El Raton” (The Mouse), has allegedly helped to run his father’s drug trafficking operations since El Chapo was extradited to the United States in 2017.

The United States had offered a reward of up to $5 million for information leading to Ovidio Guzman’s arrest, accusing him of being a key player in the Sinaloa cartel. His capture — which resulted in gunfire and cars set ablaze in Culiacan — comes as Mexican President Andres Manuel Lopez Obrador prepares to welcome Biden next week for a North America leaders’ summit at which security is expected to be high on the agenda. “El Chapo” is serving a life prison sentence in the United States for trafficking hundreds of tons of drugs into the US over the course of 25 years. (Agencies)