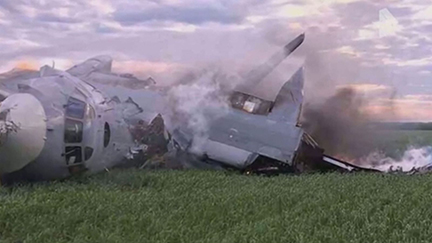 Several crew members have been killed after a transport aircraft crashed on Friday morning near the city of Ryazan in central Russia, some 200 kilometers southeast of Moscow.
Multiple pictures and videos circulating on social media indicated the crashed jet was an Ilyushin Il-76, and the Russian Defense Ministry later confirmed it was a military flight.
“During a training flight, without cargo, an engine malfunction forced the crew to perform an emergency landing on rough ground,” the ministry said, adding that the aircraft “partially” fell apart upon touching the ground.
The military have yet to confirm the number of victims, but initial reports indicated there were nine or 10 people on board. At least two of them died while six survivors were rushed to local hospitals, according to Russian media reports citing emergency services.
There were no reports of injuries or damage to infrastructure on the ground, as the plane apparently went down in a field near a freeway. The blaze was swiftly brought under control as multiple fire crews and ambulances were seen responding to the crash.
Some unconfirmed reports alleged that the plane crashed and caught fire soon after takeoff from Ryazan, where it had made a stopover for refueling en route from the city of Orenburg, near the border with Kazakhstan, to the city of Belgorod situated along the Ukrainian border. The Baza telegram channel reported that one of the jet’s engines was on fire before it attempted an emergency landing.