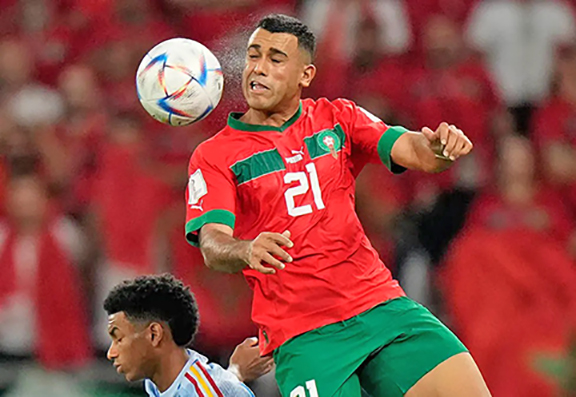 Doha, Dec 6 (AFP/APP): Morocco stunned Spain in a penalty shootout to reach the quarter-finals of the World Cup for the first time in their history on Tuesday as Achraf Hakimi struck the decisive penalty.
After 120 minutes without a goal at Education City Stadium, Spain failed to score a single penalty as Moroccan goalkeeper Yassine Bounou saved two and Pablo Sarabia hit the post.
That left Paris Saint-Germain’s Hakimi to settle the tie with a nerveless chipped kick to drive the predominantly Moroccan crowd wild.
The sole remaining team from Africa, and the only Arab team left in Qatar, will face either Portugal or Switzerland in a quarter-final on Saturday.
Morocco are just the fourth African team to reach the last eight of the World Cup — after Cameroon in 1990, Senegal in 2002 and Ghana in 2010.
Spain, the 2010 World Cup winners, failed to break down the athletic Moroccan side, with Bounou making a fine save from Dani Olmo’s free-kick in one of the best chances of normal time.
In extra-time, Walid Cheddira could have won the game for Morocco without the gut-wrenching shootout, but as he burst clear in the Spanish area, his shot was blocked by the legs of goalkeeper Unai Simon.
In the inquest to a painful defeat, Spain will wonder how PSG pair Sarabia and Carlos Soler, and Barcelona veteran Sergio Busquets, all failed to score in a shootout that Morocco won 3-0.
“It was a pity, it was decided on penalties in the most cruel way,” Busquets said.
“The penalties cost us but I am proud of my team,” said Spain coach Luis Enrique.
“I take all the responsibility because I chose the first three takers and the players decided the rest — we didn’t get to the fourth.”
The Moroccan celebrations spread across Doha, where thousands of fans gathered at Souq Wafiq, which has become a focal point for fans in the capital, banging drums and blowing horns.