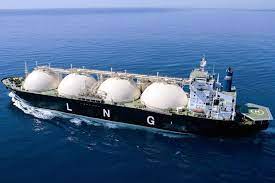 The first export shipment of gas produced at the off-shore Coral Sul plant, managed by Italian company Eni, has left territorial waters, Nyusi said in a video statement. ‘Today, Mozambique enters the annals of world history as one of the exporting countries of LNG,” said Nyusi. He said the shipment was the first under a deal with British giant BP, without providing further details.

Mozambique has set high hopes on vast natural gas deposits — the largest ever found south of the Sahara — that were discovered in the northern Cabo Delgado province in 2010.

Estimates have shown that once all the gas deposits were tapped, Mozambique could become one of the world’s 10 biggest exporters.

But the region has since been hit by an insurgency waged by Islamic State-linked militants that has cast doubts over the viability of LNG exploration sites, and stalled progress.

Eni’s Coral Sul is the only one of three mega-projects in the Muslim-majority region to be on track. The other two, operated by TotalEnergies and ExxonMobil, have been put on hold because of the unrest.

The first floating liquified natural gas (LNG) facility deployed in deep waters off Africa, Coral Sul can produce 3.4 million tonnes of LNG a year. Eni’s CEO Claudio Descalzi hailed the first gas shipment as a “significant step forward” in the firm’s strategy “to leverage gas as a source that can contribute in a significant way to Europe’s energy security, also through the increasing diversification of supplies”.

Russia’s invasion of Ukraine has disrupted gas supplies to Europe, sparking an energy crisis that has seen a major push to expand LNG production and import capacity across the globe. The start of exports showed the southern African country offered “a stable, transparent and predictable environment for the realisation of multi-billion investments” Nyusi said, repeating calls to restart work on the two land projects.

French oil giant TotalEnergies halted its $20 billion LNG project last year, after a deadly raid on the coastal town of Palma. Forces from Rwanda and other African countries deployed last year have since helped Mozambique retake control of much of Cabo Delgado. But the jihadists are now making incursions further south into the previously untouched Nampula and Niassa province.

The conflict has claimed more than 4,300 lives, and around a million people have fled their homes.