Nearly 60,000 COVID-19-related deaths reported in China in the past month; peak infection has passed: NHC 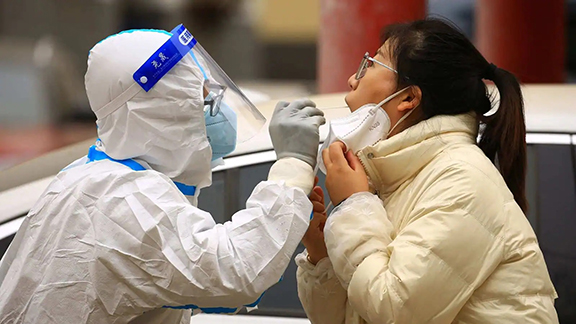 Beijing: China announced the latest figures of epidemic-related deaths, as the National Health Commission (NHC) revealed on Saturday a total of 59,938 COVID-19-related deaths between December 8, 2022 and January 12 this year, explaining that China has insisted on classifying deaths of patients with a positive nucleic acid test as COVID-19-related deaths, which is in line with WHO and international standards.

The number was revealed by Jiao Yahui, an official from the NHC. She said that the average age of those who died of COVID-19 in the period was 80.3 years old, with 90.1 percent of the fatalities above 65 years old, and 56.5 percent were aged above 80 years old; more than 90 percent suffered from underlying conditions.

China has insisted on classifying deaths of patients with a positive nucleic acid test as COVID-19-related deaths, which is in line with the WHO and international standards, Jiao noted.

The causes of COVID-19 deaths are twofold: coronavirus infection leading to respiratory failure and death, or underlying diseases interacting with the coronavirus leading to death, Jiao said. Among the reported 59,938 COVID-19 deaths, 5,503 were due to respiratory failure caused by the virus, and 54,435 were from underlying conditions interacting with epidemic infection, according to the NHC.

Jiao said that winter is the season during which respiratory and other diseases interact often impacting the elderly, thus relatively large proportions of elderly people have been victims of the current wave of the epidemic. This reminds us to focus more on elderly patients and try our best to save lives.

She made the remarks in response to concerns expressed by some in the international community regarding China’s COVID-19 data.

In response to reports that China has been playing down the number of deaths caused by COVID, Liang Wannian, head of the expert panel overseeing the national COVID-19 response, was quoted by media as saying last month that it is hard to obtain an accurate grasp of the death rate during peak infections. Such assessment can only be made after the infection ebbs away, and the current stage at the time should focus on preventing severe and fatal cases, said Liang.

China will publish COVID-19 data as a normal Class-B disease, a National Administration of Disease Prevention and Control official said at the Saturday conference. The CDC is in charge of publishing the number of severe and fatal COVID-19 cases.

The NHC officials said both the infection numbers and figures of severe cases had already reached tapering point.

The number of severe COVID-19 cases reached a peak on January 5, standing at 128,000, according to Jiao, who also noted that the number was down to 105,000 as of January 12 and that 75.3 percent of beds for severe cases were occupied.

The number of COVID-19 cases detected at fever clinics is also declining, Jiao added, stating that 33.9 percent of fever clinics patients were COVID-19 positive on December 20, and the rate has fallen to 10.8 percent as of January 12, which indicates that peak infection has passed.

With the arrival of Chinese New Year, which falls on January 22 this year, how the rural areas handle the surge of COVID-19 cases has become a focal point.

Jiao said that as of January 12, more than 5,000 county-level hospitals have received 301,000 patients, accounting for 23.7 percent of the nationwide total, despite showing a seven-day consecutive decline. Furthermore, 15.1 percent of COVID-19 cases with severe symptoms nationwide were identified in county-level medical institutes.

She urged rural areas to boost their treatment capacity for COVID-19 cases, which includes connections with better-equipped hospitals in urban areas, allowing for patient transfer; and for the dispatch of medical workers in urban hospitals to rural areas.