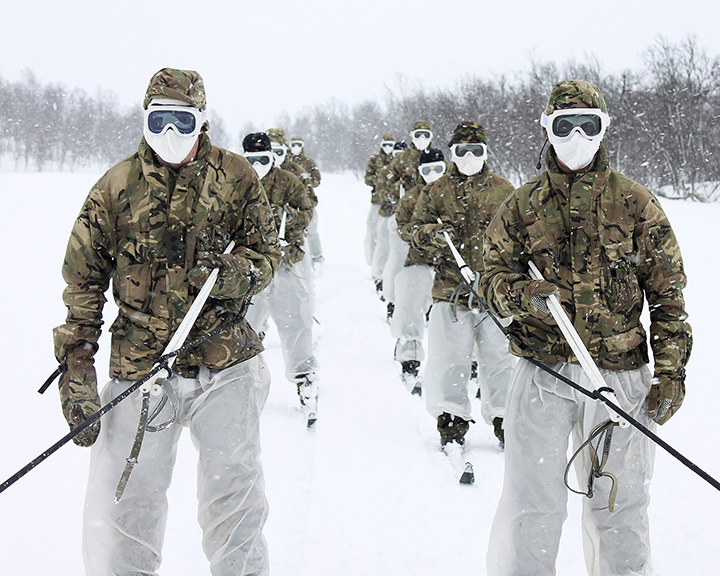 The new Future Commando Force program, made up of about 4,000 personnel with the British Royal Marines, is leading the way in Arctic operations for the entire service, according to the head of the effort.
“We are the U.K.’s Arctic experts [in] regard for specialists and electronic warfare elements,” Brig. Mark Totten said at the Modern Day Marine expo on Tuesday. “And we can use ship-to-shore maneuver and maneuver at sea to support routine operations in that theater.”
For the most part, the service previously focused on the Arctic theater for “training and environmental development,” Totten said, but that’s going to shift. He added that the Future Commando Force wants to bolster its resources in the region and is ready to position other readiness forces near the Suez Canal.
The program is composed of two littoral response groups, and it aims for forces to be able to immediately deploy to complete a range of tasks, from combat operations to humanitarian missions.
These forces form a littoral strike group that works alongside a carrier strike group, designed to boost the carrier strike group’s capabilities, Totten said. “What we’re really looking at doing in this context is supporting carrier operations much more than marines previously have.”
The U.K. has recently ramped up operations in the Arctic and called on NATO allies and partners to “take a more proactive approach to the High North,” according to a strategy document from the Defence Ministry released in March.
British Defence Secretary Ben Wallace also cautioned the region is encountering new threats — specifically increased militarization in the area from Russia and infrastructure capabilities from China.