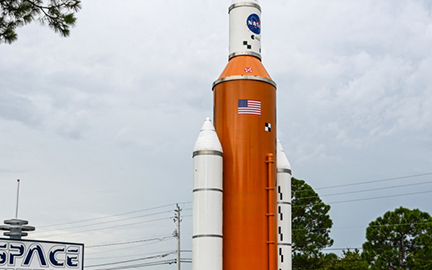 Kennedy Space Center, United States, Aug 30 (AFP/APP): NASA will make a second attempt to launch its powerful new Moon rocket on Saturday, after scrubbing a test flight earlier in the week, an official said.
Blastoff had been planned for Monday morning but was canceled because a test to get one of the rocket’s four RS-25 engines to the proper temperature range for the launch was not successful.
Mike Sarafin, mission manager of Artemis 1 at NASA, announced the date for the new launch attempt — a key step in the US program to return astronauts to the Moon — during a media briefing on Tuesday.
The goal of Artemis 1, named after the twin sister of Apollo, is to test the 322-foot (98-meter) Space Launch System rocket and Orion crew capsule that sits on top.
The mission is uncrewed — mannequins equipped with sensors are standing in for astronauts and will record acceleration, vibration and radiation levels.
Tens of thousands of people — including US Vice President Kamala Harris — had gathered to watch the launch, which comes 50 years after Apollo 17 astronauts last set foot on the Moon.