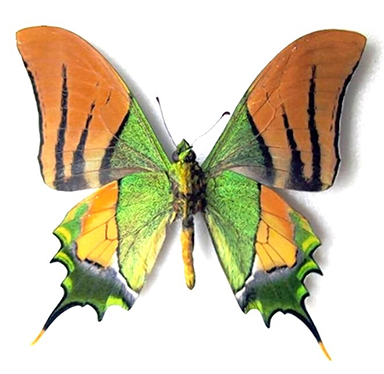 NANCHANG,Aug 31 (Xinhua/APP): Chinese researchers have successfully bred two Golden Kaiser-hind butterflies, a male, and a female. The species is considered the world’s rarest. The breeding of the female one was the first such instance in China.
The Teinopalpus aureus breeding and research base in Jiangxi Jinggangshan National Nature Reserve, in east China’s Jiangxi Province, said the two butterflies were bred earlier this month.
Commonly known as Golden Kaiser-hind, Teinopalpus aureus is the most endangered among the world’s eight most precious butterfly species and is on China’s first-class animal protection list.
He Guiqiang, an expert with the breeding base, said that only two female Golden Kaiser-hind butterflies had been found in the wild since the discovery of the species in 2007. The scarcity of females, resulting in low reproductive capacity, is related to the small wild population of this butterfly species.
He said the breeding base achieved the first artificial breeding of Golden Kaiser-hind butterflies in 2020, and released the two males in the reserve.