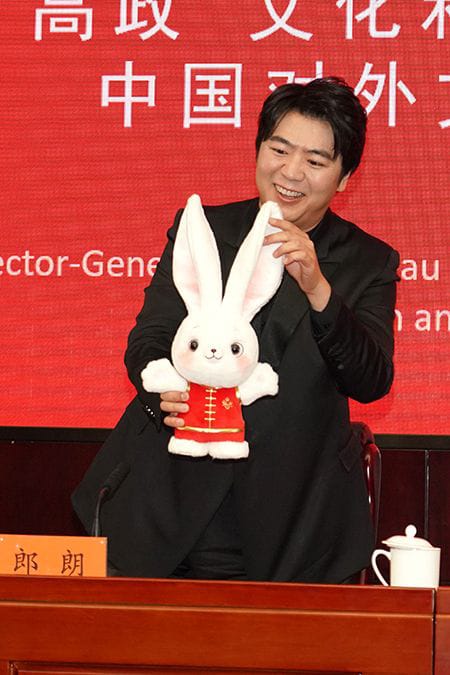 Gao said the Happy Chinese New Year, an annual brand activity held to celebrate Spring Festival, has taken off in recent years and is increasingly becoming an important platform for China to share Chinese culture with people from all over the world. The 2023 Happy Chinese New Year will be guided by the Ministry of Culture and Tourism of China and hosted by China International Culture Association. Various online and offline activities, including music concerts, temple fairs, and parades, will cover the globe.

The press conference also released the mascot of 2023 Happy Chinese New Year. As the coming Chinese New Year is the Year of the Rabbit, the mascot, designed by the Central Academy of Fine Arts, is a cute rabbit with long ears based on the shape of a lucky bag.

China will be celebrating the 2023 traditional Chinese New Year, generally known as the “Chinese Spring Festival” on Sunday, January 22nd, 2023 which will last until February 9th, 2023. It is one of the most important and biggest festivals in traditional Chinese culture, and one of the longest holidays, lasting up to 7 days.

Chinese New year is celebrated in China as well as neighboring countries like Singapore, Malaysia, Thailand, the Philippines, South Korea, and all around the world where there are Chinese communities. In Pakistan, there are thousands of Chinese who have lived there for various periods of time. They will also be celebrating the festival in its full cultural and traditional spirit. Many similarities exist between Chinese New Year and Pakistan’s religious Eid Festival. Both are based on the lunar calendar and are one of the most important and biggest festivals in their societies and both are family-centric festivals.

Xing Lijun, the Second Secretary of the Cultural Office of the Embassy of the People’s Republic of China in Pakistan briefed the Pakistani media about the 2023 Happy Chinese New Year and upcoming events in connection with the celebration of the Chinese Spring Festival. He also highlighted the Pak China Cultural exchange programs with the Pakistani journalists’ community. He informed that the year 2023 is a year of Rabbit as per Chinese Lunar calendar. Furthermore, Xing said the cultural bonds existing between the two nations were strong enough to support our everlasting friendship. This relationship will expand into all domains of Pakistani life and grow further with the passing of each day..

The Cultural Office of the Embassy of China, People’s Republic of China, and China Cultural Center in Pakistan will comprehensively utilize all the human resources in the future to showcase Chinese history, culture and tourism and will continue to make relentless efforts for a new chapter of China-Pakistan friendship, said a news release.