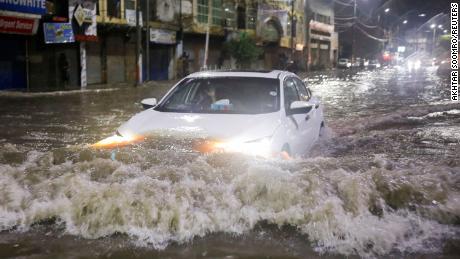 ISLAMABAD, July 31 (Xinhua/APP) –: The Pakistani Meteorological Department forecasted “above-normal” rainfall in most parts of the country in August.
The heavy rainfall can trigger flash flooding in hilly areas of eastern Punjab and northwestern Khyber Pakhtunkhwa (KP) provinces, as well as urban flooding in plain areas such as major cities of the country’s southern Sindh province, Punjab and KP, the department said in its Outlook for August.
“Due to extreme hydro-meteorological events over catchments, riverine floods cannot be ruled out,” it added.
The report said that above-normal temperatures in high altitudes are likely to increase the rate of snowmelt in the northern areas of Pakistan, subsequently increasing the chances of base flow in the Upper Indus basin.
Northeastern areas of Punjab, southern parts of Sindh, as well as coastal areas of Balochistan, are expected to receive above-normal rainfall, the report said.
Sufficient water for irrigation and power sectors will be available in August, according to the forecast.
At least 357 people had been killed and over 400 injured as heavy monsoon rains continued to batter Pakistan for more than five weeks, the National Disaster Management Authority said Thursday.