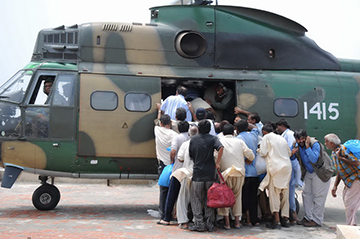 RAWALPINDI, Aug 31 (APP): The Army Aviation helicopters in its exclusive relief efforts conducted 140 sorties in flood affected areas of the country for rescue and relief operations.

The Inter Services Public Relations (ISPR) in a news release on Wednesday said more than 550 stranded individuals were evacuated through army helicopters from various flood-affected areas.

Moreover, the army helicopters delivered 29 tonnes of ration and relief items during the last 24 hours.

It also helped in 6,140 ration packets and 325 tents distribution among flood affectees all across the county during the last 24 hours.

Some, 5,213 patients were treated so far in various medical camps and 224 relief items collection points were functional in Formations Area of Responsibility for collection and onwards distribution of relief stores.