Awareness and timely treatment are vital to controlling LSD in cattle 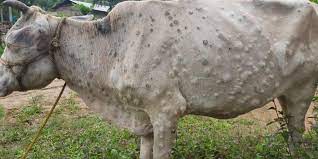 MULTAN, Aug 28 (APP): Mushtaq is in immense depression after a sudden change in his life. He does not care about himself and remains in isolation with complete silence. He keeps on visiting his cattle farm many times a day but always returns with a heavy heart. It is all due to lumpy skin disease (LSD) which deprives him of his precious sports Ox, Australian cow, and two calves. He inherited the profession of cattle rearing from his ancestors.

Mushtaq Haans, a cattle farmer and resident of Mehmood Kot (Layyah) had nurtured Sports Ox after looking after the animal for a long time. A good number of cattle farmers had approached him to purchase the Ox by offering a handsome amount up to Rs 2.7 million but he always refused to sell it.
A few days ago, the Ox fell prey to the dangerous LSD. He noticed the swelling and deep nodules on the skin and immediately rushed to veterinary centers for treatment but the Ox could not survive.
Later on, his other three cattle, including an Australian cow and two calves also died of complication triggered by the disease. This is not only the single story of a cattle farmer in the region but there are hundreds of such stories in South Punjab where the cattle farmers had to suffer loss of millions of rupees.
Either their animal died or they had to spend huge money on treatment of affected animals. Lumpy skin disease had deprived peasants from their precious cattle, in some cases the only source of income to win bread and butter for their families.
Khizer Baloch, another cattle farmer and resident of Rangpur (Muzaffargarh) has also faced loss of two animals due to the adverse effects of lumpy skin. Not being an affluent fellow, Khizer used to earn livelihood by rearing cattle.
Apart from this, farmers could not sell their animals on Eid-ul-Azha as people avoided purchasing big animals due to fear of lumpy skin disease.
The cattle farmers from across the South Punjab are in shock due to this mysterious skin disease as it had not only brought about panic and pain but also hit them economically.
In Pakistan, initially, an outbreak of lumpy skin was reported in Sindh and then South Punjab and some other areas in the country.
“This is an infectious disease cause by viral infection,” said Dr Suhail Azmat, Focal Person for Lumpy Skin Disease in South Punjab. “It is characterized by fever, nasal discharge, enlarged superficial lymph nodes and multiple nodules of the skin and mucous membranes.”
Dr Suhail Azhat informed that a total of 12,500 animals with lumpy skin disease have been reported in three divisions of South Punjab including, Multan, Dera Ghazi Khan and Bahawalpur.
He said that 72 animals died of the disease and around 11,500 recovered after treatment. “The Livestock Department has complete data of affected, recovered, under-recovery and dead animals.”
Dr Suhail said the Livestock Department vaccinated 1,070,000 animals in the region through special teams constituted to protect animals against lumpy skin disease. “The animals are being vaccinated under a ring-vaccination plan. Under this plan, all animals around a radius of three to four kilometers from the affected animal’s area were vaccinated.
About other steps, the focal person informed that the Livestock Department was holding awareness seminars to impart necessary information and knowledge to farmers about this disease. “We educate them on symptoms, treatment and measures to avoid its spread.
He said Lumpy Skin is curable and the cattle farmers have been advised to contact the qualified doctors immediately after seeing the symptoms of this disease.
Suggesting some useful precautions to help avoid spread of LDS, Dr Suhail has advised the cattle owners to control of animal movement, ensure vaccination and elimination of flies, mosquitoes, ticks as well as enhance farm bio-security and hygiene.
When asked about any effects of this disease on human beings as a result of using milk and meat of ailing animals, Dr Suhail stated, “consuming meat and milk of affected animals does not spread the disease in humans.”
He further informed that Livestock Department was in contact with different universities for maximum research on the disease and preparation of vaccine. “At present around one million vaccine vials are prepared monthly and the concerned department are endeavoring to further enhance this capacity.”
The Livestock department has also introduced a mobile Application (ADRS-FARMER) to facilitate the cattle farmers in treatment of animals. Besides this, a Helpline (08000-9211) has also been launched for farmers and they can contact on this number around the clock for consultancy and necessary information.
Since, livestock is a mainstay for meeting milk and meat requirements of people across the country, there is dire need for educating and encouraging farmers for commercially promoting this sector to meet our future needs.