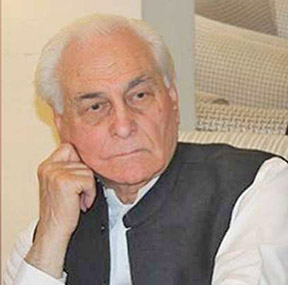 The consensus on Azam Khan was reached in a meeting of the government and opposition committees held here for the purpose.

Addressing a joint press conference along with PTI KP President Pervez Khattak and Chief Minister Mahmood Khan, Jamiat Ulema-e-Islam Pakistan-Fazal (JUI-F) leader Akram Khan Durrani said, “We have chosen a person who is acceptable to all.”

He said former bureaucrats Zafarullah Khan and Sahibzada Saeed were also considered for the caretaker chief minister; however, they agreed on the name of Azam Khan.

He said that Pervez Khattak played an important role in reaching the consensus.

He also served as the KP Minister for Finance, Planning & Development Department.

Azam Khan is a graduate of the University of Peshawar. He got the Barrister-at-Law degree from Lincoln’s Inn, London.