Change of terminal adds to the confusion, rush at Jeddah airport : PIA 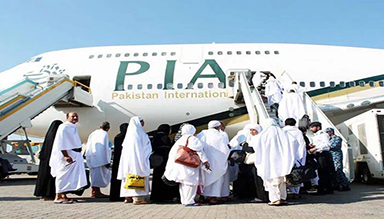 ISLAMABAD, May 03 (APP): A spokesman of Pakistan International Airlines (PIA) on Tuesday said the national flag carrier was extending all possible facilities to the passengers facing delays in getting flights from Jeddah, Saudi Arabia after the airport authorities shifted all international flights to the North Terminal due to ‘massive rush’ of air travelers.
Explaining the prevailing situation at the Jeddah airport, PIA spokesman Abdullah Hafeez Khan in a press statement said that all airlines’ flights departing from Jeddah were facing extended delays.
He said passengers at the airport were facing difficulties in check-in as there were only four boarding gates at the North Terminal that were insufficient to handle the increased number of travelers. So, he said, the delay was expected in tonight’s (Tuesday) flights.
Accordingly, the spokesman said the PIA administration had issued instructions to provide all possible facilities to its passengers, while the national flag carrier’s officials in Jeddah were constantly in contact with the Saudi authorities.
He said PIA’s local teams in collaboration with the airport authorities were making arrangements to reduce delay time in the flights’ departure. “The PIA’s CEO himself is monitoring the situation.”
The spokesman said Minister for Aviation Khawaja Saad Rafique was also taking a moment-to-moment review of the situation so that the suffering of Pakistani passengers could be minimized.
He said the PIA management extended an apology to passengers in advance and hoped the passengers would understand the situation and cooperate with the national flag carrier.