Earthwork on the first ever five star hotel in Galliyat starts 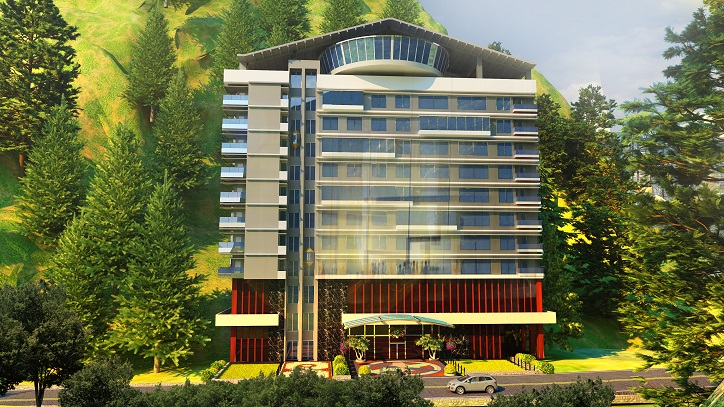 PESHAWAR, Sep 02 (APP): Earthwork on the first-ever five star hotel in Galliyat has been started which on completion is expected to give a boom to the tourism industry of Khyber Pakhtunkhwa by attracting scores of local and international tourists wanted to enjoy charismatic beauty of pine forests in the mid of Himalayan foothills.

“The groundbreaking of the mega project has already been performed, and currently earth work is in progress to construct a 122 rooms resort offering state-of-the-art hospitality with famous local cuisine,” says Abdul Mohaimin, CEO of Dharti group that launched the project.

Talking to APP, Abdul Mohaimum informed that name of the five star hotel is decided as `Glasshaus’ because it will have open glass facades to give a sensation to guests of being immersed in nature without being exposed to it.

“Our team has also designed large green outdoor spaces to envisage the true essence of the alpines,” he added.

The Dharti group, he continued, selected Galliyat for construction of five star hotel with an estimated investment of Rs. 6.2 billion because the famous tourist resort attracts tourists attention in both summer and snowy seasons.

The location of the hotel is between Nathiagali and Muree near Barian area which is around 60 km from Islamabad.

Abdul Mohaimin said the project’ stipulated period for completion is around three and a half years and will generate around three hundred employment opportunities mostly for locals.

“Special focus has been given on preservation of green cover at the site and a controlled forest within the premises of the hotel spreading over an area of around eight kanals of land will also be grown,” he assured.

The total area of the project is around 40 kanals and it falls under the control of Town Municipal Administration (TMA) Abbotabad.

CEO Dharti group also apprised that the earth work of the project is bolstering local economy as majority of labor is dwellers of the area while services goods and other items are also purchased locally.

The group is also concentrating on rehabilitation of those who will get displaced due to execution of the project whose property is also purchased in accordance with price of their choice, he added.

The first ever five star hotel in Galliyat will prove to be a win win initiative for both the developer in terms of business and tourists as well who will enjoy beauty of the area besides standard hospitality and comfortable accommodation.

“Construction of a five star hotel in Galliyat is a happy tiding from tourism promotion points of view as the project would have multi-dimentional benefits for the industry providing recreational facilities to public ,” observed Ali Syed, Manager Tourism Development Authority Khyber Pakhtunkhwa.

Galliyat is attracting thousands of tourists on annual basis and there was a great demand for existence of a high standard staying facility to invite international visitors, Ali comments.

He said Tourism department is displaying scenic beauty of Galliyat on websites for diverting attraction of international tourism and construction of a high standard hotel will bolster our efforts.

Ali appreciated the decision and observed that construction of five star hotel will not only help in promotion of tourism in the region but also have a very positive impact on local economy.