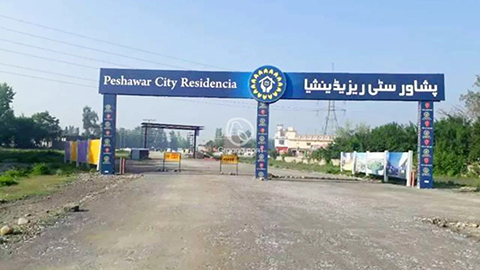 PESHAWAR: Dreams of allottees shattered badly after they came to know that the PTI’s government initiated housing project ‘Peshawar City Residencia’ under Naya Pakistan Housing Scheme proved a project in the air.
In 2020, under the vision of the then premier Imran Khan, ‘Naya Pakistan Housing Scheme’ was launched in Pakistan to provide homes to the low-income population of the country through soft loans.
As per the directives of the federal government, PTI government in Khyber Pakhtunkhwa too acted accordingly and initiated a housing project in the name of ‘Peshawar Residencia’ for homeless people of the province in 2020 at Peshawar.
To materialize the plan, KP government made an agreement with the PHAF Islamabad to build houses on the proposed ‘Peshawar City Residencia’ site instead of plots through soft loans.
To attract a maximum interested people, the project was well-advertised in various newspapers, which resulted in making a huge payment and investment in the same, as the public paid in the scheme and allotment was made on the draw.
But unfortunately, the story was not as colorful as advertised. The reality was much different, and the government did fraud in the project, as the required land was neither purchased nor cleared for the scheme.
To dig out the truth, the PHAF initiated a survey in which, many complications surfaced and the owners of the land at Surazai restricted even entry of the PHAF officials on site.
Apart from that, police and the officials of PHAF/PHA even failed to see the site in the last 3 years and that’s why this mega housing scheme is not turning into a practical shape, despite the fact the people have invested much of hard earned money in this fraudulent scheme so far.
Moreover, it seems that CM Mehmood Khan led government doesn’t take serious steps to get this issue resolved once and for all. Therefore, the situation has been becoming so tense and unrest among the allottees increasing day by day as they have tired of the empty and fake promises made to them by the officials concerned.
Last week, ANP’s MPA Mr. Khushdil Khan from PK 70 Peshawar-V raised a question on the issue that why the government has so far been unable to resolve the issues in the mega project
The KP Housing Minister was unable to provide a satisfactory answer. Though the given timing for the completion of the project has already competed, no progress is seen so far and that’s why Housing Minister failed to give an answer to the house. Moreover, the Housing Minister has so far been unable to visit the site due to the law and order situation. The very simple question is why the scheme was extended without homework and purchasing land?. Why the same was not restricted to the already purchased land by the ANP government in 2012?
The question is, why is the land of the public sold out by the government to others in such a hurry? Does any law permit such a right to the government?
Why are immature schemes advertised, and the poor public looted in the name of such fraud projects? If this project is hanging for the last three years then how the government can launch another project in the name of “New Peshawar Valley?
Sensing the situation, the allottees are worried a lot and thinking of approaching any court of law soon. This act on the part of the allottees would certainly earn a bad name for the government which came into power in the name of providing justice to all the countrymen. However, the reality is that proved involved in fraud with the poor homeless public of Khyber Pakhtunkhwa.
The questions raised by the MPA Khushdil Khan have encouraged the poor people and the association, All Allottees Peshawar Residencia Association is indeed thankful to him for highlighting and fighting for resolving this issue on the floor of the Provincial Assembly.