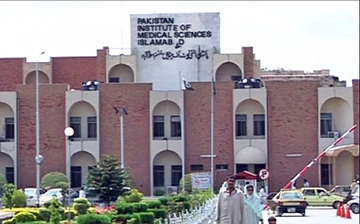 ISLAMABAD, Jan 12 (APP): The Ministry of National Health Services, Regulations, and Coordination on Thursday restored the previous federal status of the Pakistan Institute of Medical Sciences (PIMS) hospital and its employees.

According to official sources, while implementing the Pakistan Institute of Medical Sciences (PIMS) Bill, 2022, the Ministry of National Health Services, Regulations and Coordination has allowed Dr. Rizwan Taj, Professor of Psychiatry (BS-20) to look after the work of the post of Executive Director for disposal of day to day affairs of the hospital with immediate effect until the appointment of a regular incumbent.

It is pertinent to mention here that the Joint Session of the parliament (Majlis-e-Shoora) had passed the Pakistan Institute of Medical Sciences (PIMS) Bill, 2022 to repeal the Federal Medical Teaching Institutes Act, 2021 commonly known as the MTI act.

The bill, which was moved by Dr. Mahreen Razzaq Bhutto and passed by the parliament’s joint sitting restored the federal status of PIMS employees, as under this act hospital means a teaching hospital as notified by the federal government.

Through this act, the Executive Director will be appointed by the government in accordance with the provisions contained in the Civil Servants Act, 1973, and rules.

The MTI ordinance was promulgated in November 2020, under which the hospital was to be run through a board of governors (BoG). The BoG members were appointed and notified by the Ministry of National Health Services on the recommendation of a search and nomination council.