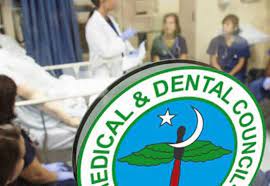 According to the spokesperson of the council, after the official signing of the gazette notification, the PMDC bill has become now fully functional.

He said that now all matters of the PMDC will be handled as per the guidelines given in the passed bill which was signed by the President of Pakistan to reconstitute the Pakistan Medical and Dental Council in order to establish a uniform minimum standard of basic and higher qualifications in medicine and dentistry.

It is pertinent to mention here that the Joint Session of the parliament (Majlis-e-Shoora) passed the Pakistan Medical and Dental Council Bill, 2022 on December 20, 2022. The bill was returned and raised objections by the President of Pakistan Dr. Arif Alvi for further amendments.

As per the commencement Pakistan Medical and Dental Council Act, 2022, shall stand dissolved and the Minister-in-charge of the Division shall look after the affairs of the council till the constitution of the new council under this act is elected by the council.

The Minister-in-charge of the Division shall exercise the powers of the council during the transitory period.

The National Assembly and Senate of Pakistan had already passed the PMDC Bill, 2022.