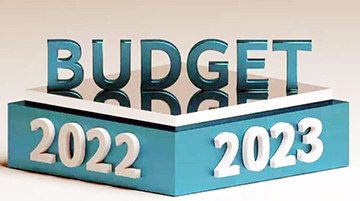 The budget, presented by KP Finance Minister Taimur Saleem Jhagra, envisages a 16 per cent raise in salaries of government employees and a 15 per cent raise in pensions. The budget also allocated Rs1108 billion for the settled areas of Khyber Pakhtunkhwa and Rs223 billion for the merged districts. Shuhada package for police was also increased in the budget.
The total current budget of the province is Rs913 billion, with an allocation of Rs789 billion for the settled areas of the province and Rs124 billion for the merged districts.
Also, the minister announced the regularisation of the services of around 63,000 employees, including contractual teachers, ad hoc doctors and the employees of 128 projects underway in the erstwhile FATA region.
Speaking on the assembly floor, Taimur Saleem Jhagra said that the pension reform is the new element in this year’s provincial budget. Elaborating further, Jhagra said that a new employee upon joining the service will deposit 10% of his salary in the pension fund and the government will deposit 12% of his salary amount in his/her pension.

In his budget speech, he sheared details of initiatives and said that treatment for bone marrow transplant, thalassaemia, and advance-stage cancer will also be added to the Sehat Insaf Card. “Four new medical colleges will be established in district Dir, Buner, Charsadda, Haripur,” he said adding youngsters will also be given loans worth around Rs25 billion.
The Minister also said provincial government has earmarked Rs319.2 billion for the development of which only Rs8 billion will be received under the PSDP. According to the documents, Rs25 billion have been earmarked for Sehat Insaf Card program, and Rs 6 billion for capacity expansion grant of MTIs and its allied entities and medical college. Similarly, a sum of Rs11 billion (current and development) has been set aside for medicines of primary and secondary healthcare, and Rs4 billion for provision of free OPD medicine in all public sector health facilities in Khyber Pakhtunkhwa.
Likewise, an amount of Rs1billion set aside for providing ambulatory services for expectant mothers. Rs2 billion provided as an operational budget to universities.
Likewise, a sum of Rs2 billion has been proposed for provision of missing furniture in schools, while an amount of Rs2.4 billion allocated for Scholarships with a majority of its going to girls. Similarly, a record allocation of Rs227,087 million for Elementary and Secondary Education including Rs3,410 million for current expenditures while Rs16,996million for development and Rs12,857 million foreign aid.
For Energy and power sector, a sum of Rs29,203 million has been set aside under ADP, including Rs527 million for current and Rs7,725 million for development while Rs20,951 million would be received from foreign Aid. A sum of Rs4,191 million for Environment has been allocated, including current Rs4,144 million and Rs47 million for development.