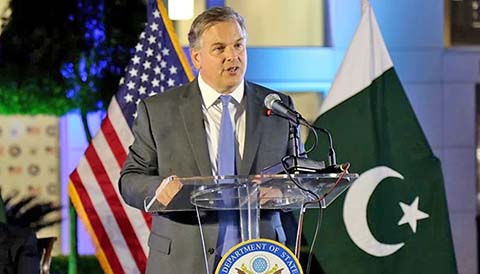 ISLAMABAD, Dec 1 (APP): The United States Ambassador Donald Blome visited the Leopard Preserve Zone in the Margalla Hills National Park the other day and described the protected area as an ‘extraordinary jewel’ in the heart of the federal capital.

The US envoy along with Country Director DAI Arsalan Faheem visited the Wildlife Rescue Centre established in the old Marghazar Zoo and received a briefing on the biodiversity-rich national park.

Chairperson Islamabad Wildlife Management Board (IWMB) Rina Saeed Khan and IWMB staff accompanied the US Ambassador during the visit.

Ambassador Blome said, “I am thrilled to have this opportunity to visit Margalla Hills National Park.” He also appreciated the efforts of the dedicated IWMB staff working to preserve the wildlife and biodiversity of Margalla Hills.

He also mentioned that the Pak-US green alliance was also supporting various climate resilience initiatives focusing on biodiversity, agriculture, and other areas related to the environment and nature.

The IWMB staff showcased taxidermy specimens of different illegally hunted animals like the Common Asian Leopard, Ibex, Markhor trophies, and black buck dear and hides or pelts of Barking Deer, Red Fox, Jackal, Mongoose, Bengal Tiger, and Snow Leopard. These pelts on the display were recently confiscated in a raid by IWMB staff at a shop in F-7 Market.

Chairperson IWMB Rina Saeed Khan and Director Wildlife, IWMB Dr Tariq briefed the ambassador on the efforts of the Board in nature conservation and protection of precious biodiversity species of the Margalla Hills National Park.

During the visit to Wildlife Rescue Centre, the US envoy observed black bears and common kites, eagles, and buzzards that were under the rehabilitation of the IWMB and lauded the efforts of the Board staff.

The ambassador also hiked into the Leopard Preserve Zone where he was briefed on the living natural habitat of the endangered wildcat. A short documentary on Margalla Hills National Park was also shown to the Ambassador and the participants.

In the end, Country Director DAI, Arsalan Faheem gave the vote of thanks. He said his organization as the international development agency was collaborating with IWMB and NDRMF to protect the leopard preserve zone and Margalla Hills National Park.

“Pakistan is looking for a new identity and it has rich tremendous natural preserves. It [Margalla Hills National Park] can become a model in Islamabad to change human behaviour towards nature across the country.”

He concluded that the Board had a committed team to protect the National Park which was a propitious development to ensure conservation efforts.