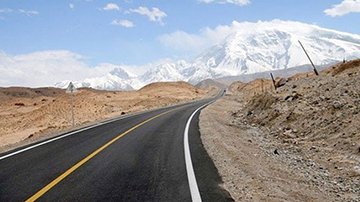 QUETTA, Sep 03 (APP): The National Highway (N-65) connecting Balochistan to Sindh province through the Quetta-Sibi-Jacobabad route has been reopened for traffic, official sources said on Saturday.

The Bibi Nani Pinjra Bridge on the National Highway was washed out by the recent heavy rains and flood water.

Traffic between Quetta and Sibi was suspended for the past several days due to the bridge being washed away.

On the directives of Prime Minister Shehbaz Sharif, Chairman National Highway Authority (NHA) Captain (Rtd) Muhammad Khurram Agha along with member NHA and his entire team have been in the area for the past one week to supervise the repair efforts and restore the highway.

With the day and night efforts of Chairman NHA and his team, the alternative route was constructed.

Balochistan Chief Minister Mir Abdul Qudus Bizenjo expressed his satisfaction and happiness on the restoration of the national highway.

“With the restoration of the highway, delivery of goods and economic activities will be resumed,” CM said.

The chief minister’s also issued directives to Deputy Commissioner Kachhi to deploy Levies Force to regularize the flow of traffic on the alternative route.