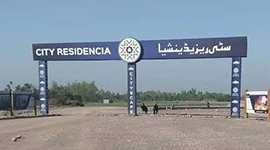 ISLAMABAD, Jan 09 (APP): National Accountability Bureau (NAB) Khyber Pakhtunkhwa has asked the citizens cheated by the owners of City Residencia, Peshawar to submit their compensation claims by January 24, 2023 for getting back their looted money.
According to an announcement of NAB Khyber Pakhtunkhwa, the bureau has started investigations against the owners of the fake housing society on the allegations of receiving money from the people by fraudulent means by promising them plots in the aforementioned housing scheme.
The NAB has asked affected people to submit their applications on stamp paper along with copies of their relevant documents duly attested by a notary public to Deputy Director (Coordination), Investigation Wing,I, NAB, Khyber Pakhtunkhwa, PDA Complex, Block III, Phase V, Hayatabad, Peshawar within the stipulated time.