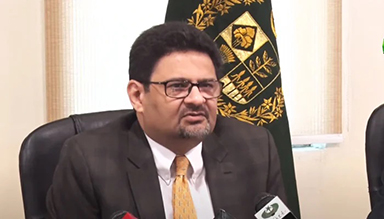 KARACHI, Aug 05 (APP): Rupee has started appreciating against the dollar in the last few days as a result of decreasing imports and the foreign exchange outflow, however, this is not the best case scenario in terms of economic growth.

This was stated by Federal Minister for Finance and Revenue, Dr. Miftah Ismail on Friday while speaking at Gong Ceremony at Pakistan Stock Exchange, which was also attended by PSX Chairperson, Dr. Shamshad Akhtar; Chairman of Securities and Exchange Commission of Pakistan, Aamir Kha, PSX Managing Director, and CEO Farrukh H. Khan; PSX Board Members and key stakeholders of the capital market.

The minister said that the country needs inclusive and sustainable growth and the government is taking all possible measures for the same.

He acknowledged the importance of capital markets and the critical role they play in the development of a modern economy. And, the government was committed to address all issues confronting the capital market in Pakistan.

About the macro-economic situation prevailing in the country, the Minister said that being an economist, he looks at the fundamentals. From a macro-economic perspective, the economy needs to stay solvent and protect it from default.

Dr. Miftah said that he personally did not believe in import substitution model but in export expansion. Soon incentives for exporters would be provided.

Pakistan’s tax to GDP ratio was very low at 9.2 percent, which needs significant increase for sustainable growth and development would go for reforms for the same but in a gradual and orderly fashion. The immediate steps taken by the government i.e. that withdrawal of fuel subsidies and increasing direct taxes had started bearing fruits and had saved our country from default, he said.

PSX Chairperson Dr. Shamshad Akhtar apprised the Finance Minister of the recent developments, along with mentioning certain issues which needed resolution for the uplift of the capital market and the economy.

She said PSX had formulated a new strategy which would be launched this year.

Some key actions would be taken that would pave the way to augment the supply side by mobilizing equity and debt listings and issuances as well as the supply side by increasing outreach to investors. More important was strengthening the governance of not only the exchange itself but the listed companies.

PSX’s MD and CEO maintained that it was imperative for the growth of the national economy to create a conducive environment which would help to attract more companies and investors to the capital markets.

A broad based capital market did help achieve important economic and social objectives, including improved savings and investment rates, documentation of the economy, increasing the number of tax payers and reducing wealth inequality. That, developing the capital markets was fully aligned with the government’s set objectives.

“Capital markets don’t ask for any concessions or subsidies; we only want a level playing field compared to other asset classes and the large informal sector,” said adding that the capital market growth consistent tax and economic policies were needed

SECP Chairman Aamir Khan expressed that well-functioning capital markets could contribute to strengthening corporate sector and investors , and improve savings and investment rates. All this would support the economy as a whole.

Later, Federal Finance and Revenue Dr. Miftah Ismail chaired a meeting attended by the top management of PSX and SECP , and other key stakeholders of capital market. The issues impacting the capital markets, business and the current economic scenario and challenges thereof were discussed.