Pakistan’s Hospitality, And the Refugees From Across The Border 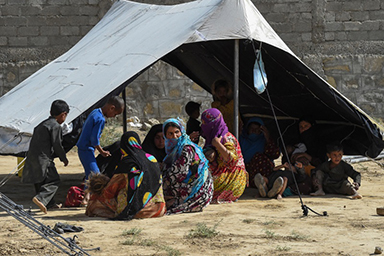 Life’s most persistent and urgent question is what are you doing for others? : Martin Luther King, world humanitarian day is celebrated every year globally on 19 August, to throw light on thousands of volunteers, professionals, and institutions who deliver their efforts wholeheartedly for the sake of humanity.

Humanity means forgetting our selfish interests at times when others need our help. Humanity is just extending unconditional love to each and every living being on Earth. In this regard the role of Pakistan remained remarkable and recognizable throughout the world, the major is when Pakistan exemplified its humanity by hosting millions of Afghan refugees in a hard time being a hospitable neighbor, being a developing country Pakistan face economic crisis and ups down but never compromised on steps taken for a humanitarian cause, and pursued generous and solicitous approach.

An estimated 3.5million of Afghan refugees are adjacent in Pakistan, of which half are registered, and a huge figure is still unregistered since the 1980s. Refugees who arrived were traumatized and with medical needs. Secondly, Hunger was already set in. Definitely, new arrivals in a country will need basic food, water, and shelter, as well as medical and educational support, in the early years, the Government of Pakistan received generous funds and support from the international community, including ( World Food Program WFP), for the Afghan refugees, however, in the year1995 the direct food assistance was withdrawn by WFP. For the last four decades, Pakistan has taken charge of millions of Afghan refugees just following its cultural and humanity purpose.

Recently DG ISPR regarding the fencing on Pak Afghan border stated that; “The purpose of the fencing is not to divide the people but to protect them. This is the fence for peace, work on it will continue, and the fencing will be here to stay,”. To discourage any kind of propaganda against fences on the border, the statement of peace by DG ISPR is enough. UNHCR also lauds Pakistan’s efforts in hosting millions of Afghan refugees.

Afghan refugees have been residing here for almost four decades and many are born here, people of Pakistan also cater to them wholeheartedly, many refugees claim we are safer and our women and kids are safer here in Pakistan, while others state, that we are now settled here in Pakistan and consider it as our homeland. Pakistan army on the border and the Pakistan government is trying their level best to ensure the safety of the people and to promote peaceful relations.